Met up with FOX at his place Friday on my way to the SMIB campout. He was ready on Cat Herder time :rofl

We made our way east toward Fredericksburg. Here, FOX's Aprillia decided to take a nap in the gravel. Ouch.

Eventually we made it to camp and got set up

MtnGoat returning from a shower run

They took a ride...Dr. Strangelove mixed with Hunt for Red October

The Marina at our Campsite

Everyone seemed to like our waitress...and she milked it for all that it was worth.

The great fight over who pays for the imitation Old Bay

We Cat's have class :deal

After our meal, we made our way back to camp. Swatting at flies and swapping lies got old so off to bed everyone went.

I awoke at 5AM Saturday ready ride. I got FOX up (doubt he knew how early it was) and were on the road by 6 :ricky

Made a stop at the PAX Naval Air Museum

Here are my point&shoot shots taken while riding on Saturday. 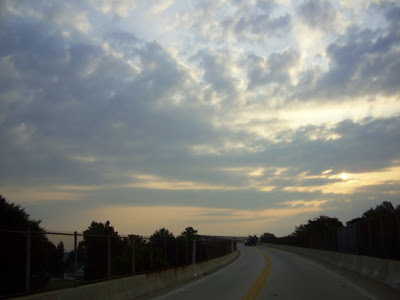 Getting up early has its perks. This is the Sunrise over Solomans Island 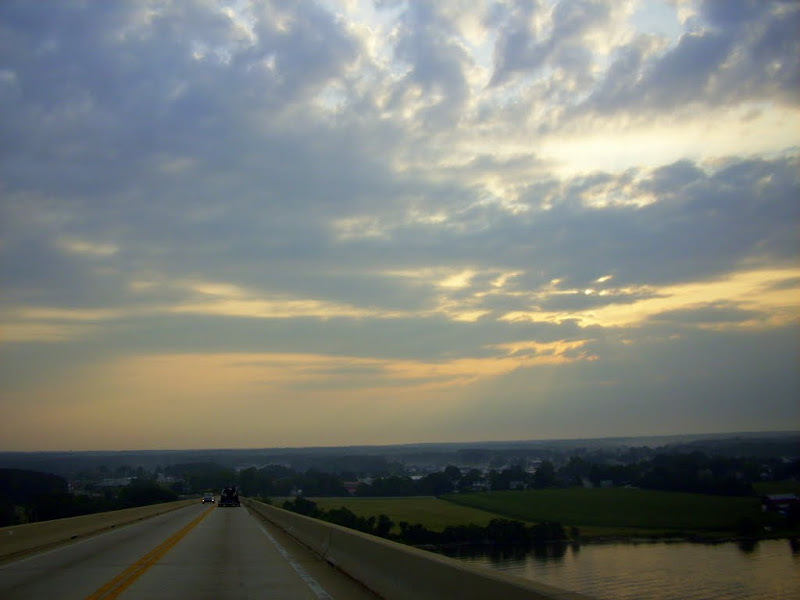 And I spy a FOX 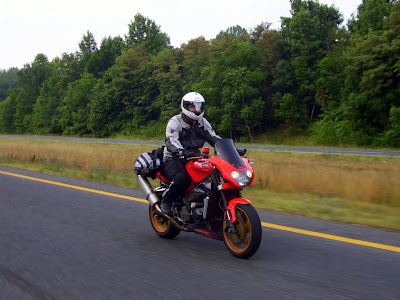 Crossing over the Annapolis Bridge 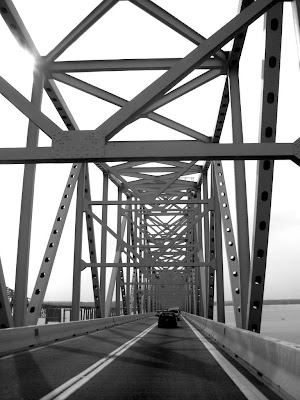 And who is behind me? 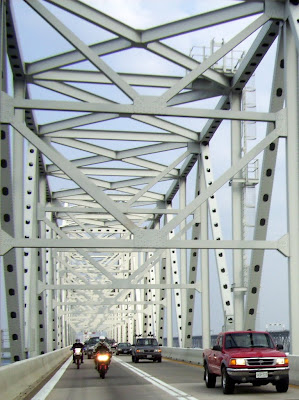 Then met up with badguy

And a stop at the Wye Oak in MD

Then a friend we were trying to visit lost his phone and some dude at the gas station found it and brought it home with him:patch So we rolled over to Quantico and picked it up.

Then brought it to my friend.

After we arrived at my buddy's house, ROB was stuck in riding mode...

Badguy took a spin on the DR200 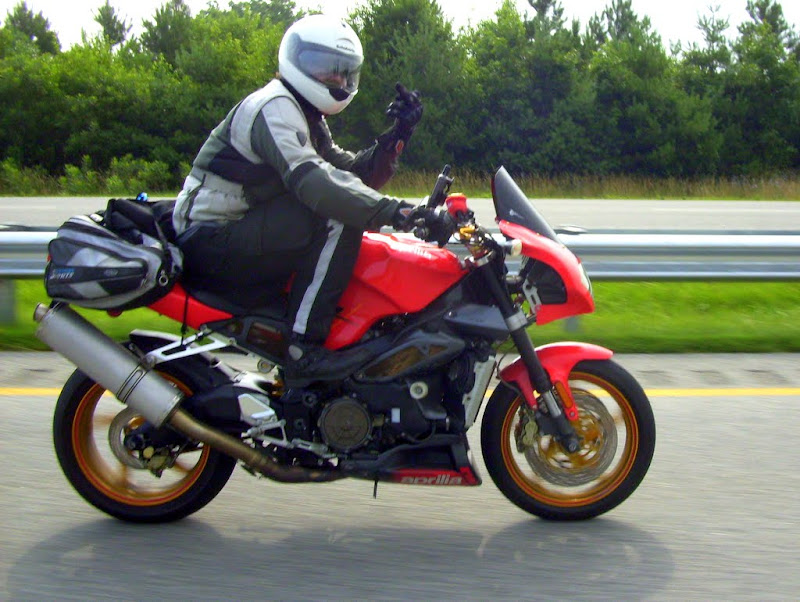 I see your soles 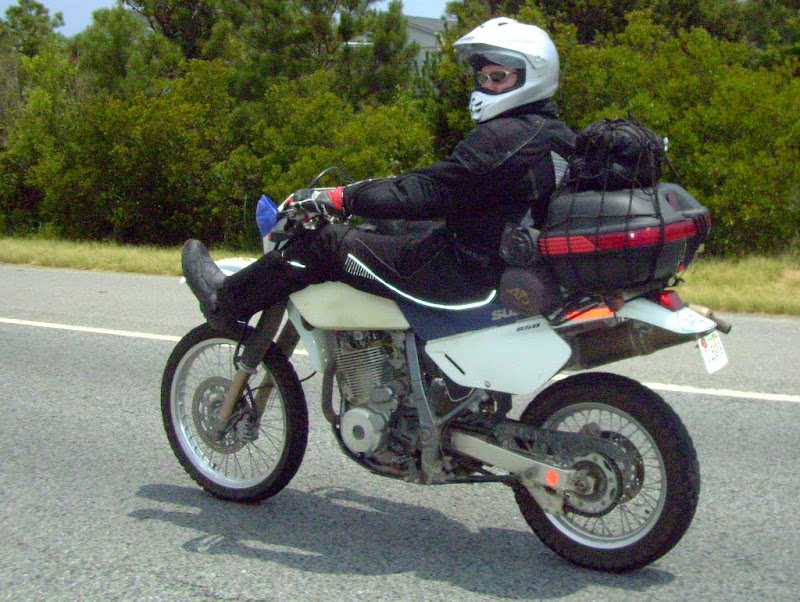 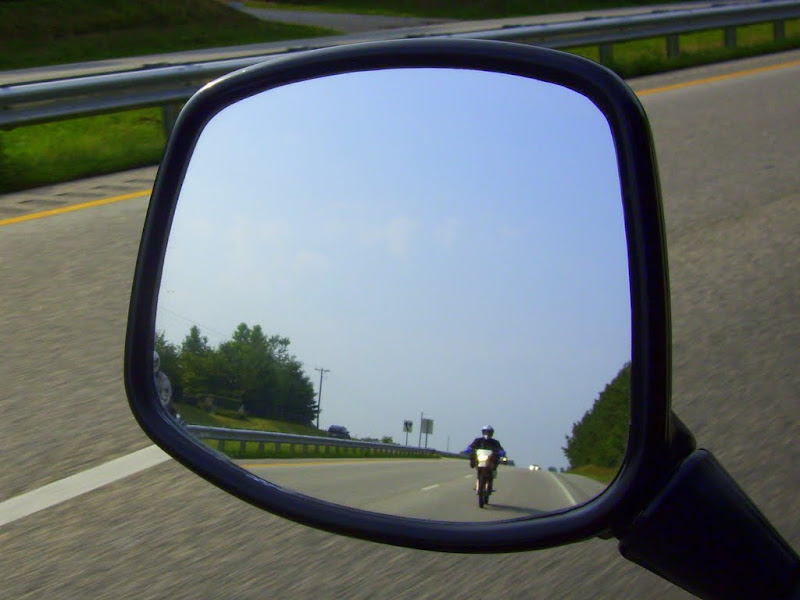 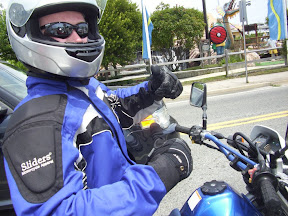 Say...what is over that SUV? 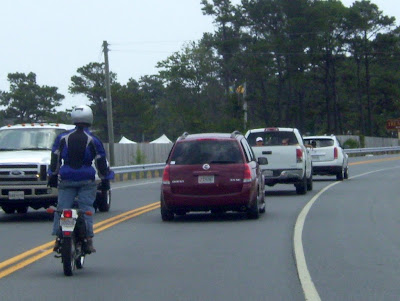 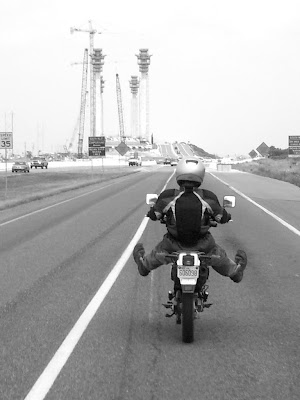 This shot is what its all about! 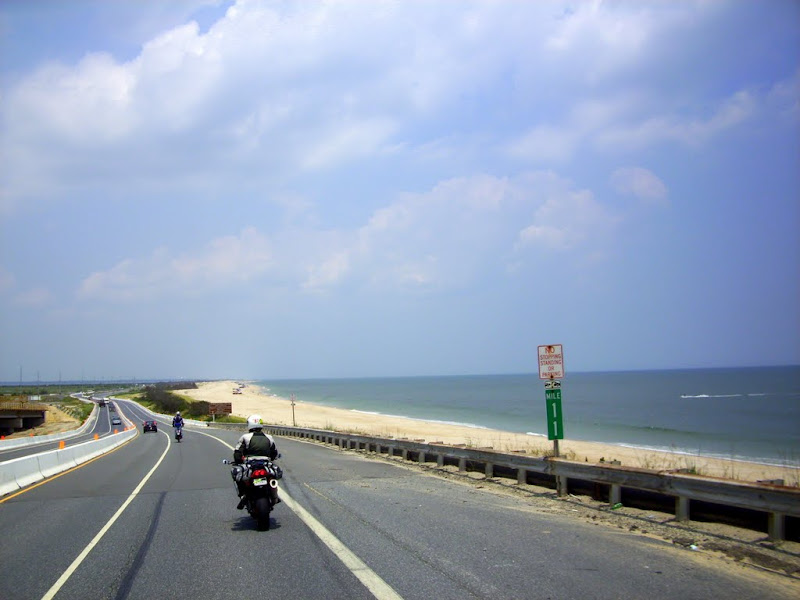 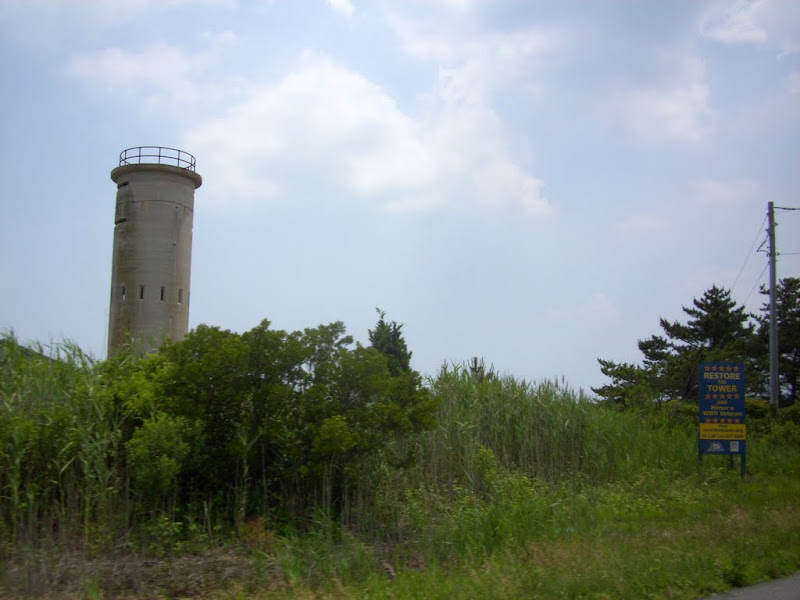 After Dogfish Head we rode 404 back to 50 and got behind a squid and a brup.brup.brup dufus 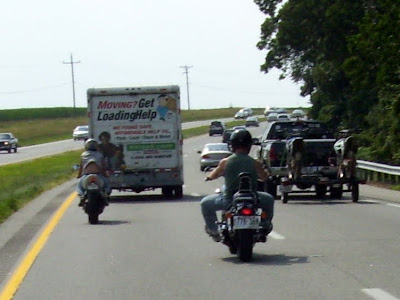 Then these folks ended up behind us :evil 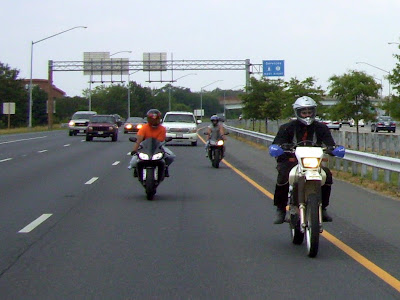 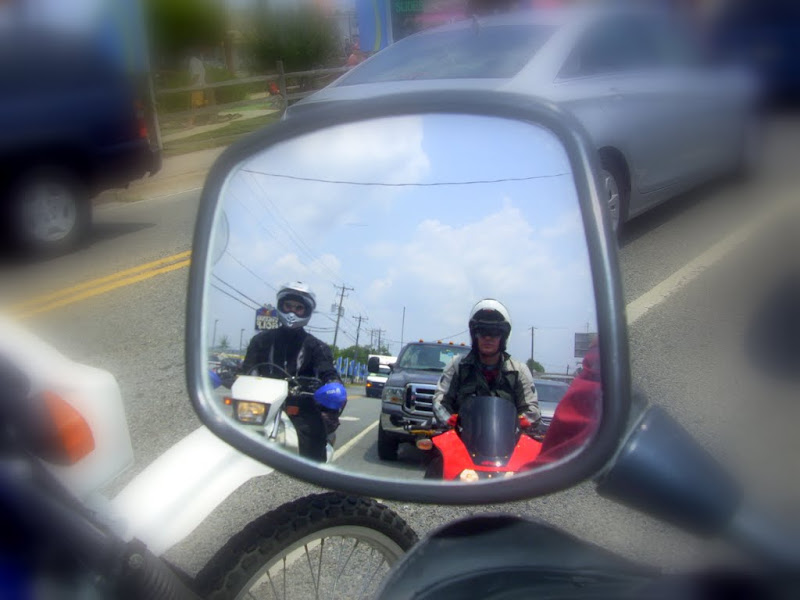 After leaving, we placed a tag for the NA Wild Card Game

Chillin out in the 95 degree heat

and some bridge badness

Then swapped bikes with Badguy for the return to SMIBville 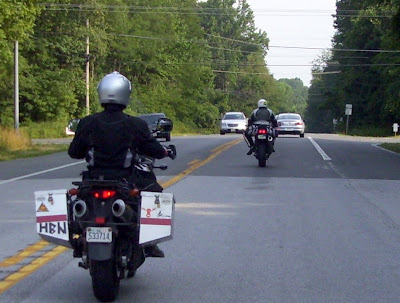 But couldn't see much outta the mirrors :doh I realize it was just my fat ass 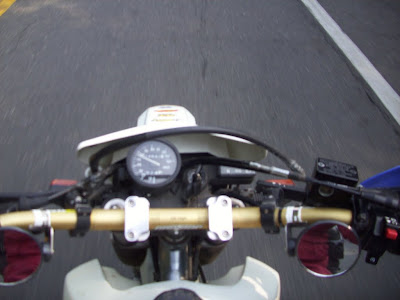 And over to ScottP's for some crab and suds
Dude! BUMMER ...we were at scotts eating crabs in the WV :rofl

Finally back to camp, I had a MUCH needed shower and then promptly went to bed...oh wait...no I sat around with Gail and snapped some shots.

He was having trouble with his internal balance mechanism

"What the hell you looking at!?"

NOW it was time for bed :rofl

SUNDAY
And a good morning from camp smib

Fox is ready to roll...over

Up and at em. Down at Piney Point lighthouse

Some more from piney point

Then down to St Marys

Then down to Point Lookout

Then Badguy showed me this cool church at chapel point

Then I rolled over to my parent's house and had lunch and relaxed with them for a bit. Still had 770 miles for the weekend but wanted to reach my 1000mi mark. OFF I GO!!! :pynd

I just started riding...out 66 then turned onto 17 past Sky Meadows and toward WV. I was just enjoying the scenery and came across this place. I think it was Millertown or something like that.

And my flower shot of the day

The roads were great despite the heat!

I rode and rode...somewhere up near 340 into Berryville and continued toward Charles Town. Got lost on back roads (on purpose) then wound up at Summit Point:evil but they had just finished racing and the cars were leaving on trailers. Next time :cry

Looped around and made my way to 11. Decided to ride north and saw a sign for Hagerstown...hey isn't that near Antietam battlefield? I've wanted to visit there again. Last time I went was in school.

WEST (down the bloody road)

I had fond memories of this bridge from my school trip here. This was in the days before I really appreciated the beauty of places, their fit with the surroundings and photogenic nature.

Rolled down to the C&O canal and checked out some $10 campgrounds I had planned to stay at in the past. Saw some nice stealth camping spots nearby I liked better. Canal Rd was cool and in the mid eighties so I took my time

Rode through Shepardstown (neat) then down and passed near Summit Point again on 1. Making a loop unbeknownst to me. Got on 11 and decided, come hell of high water, I was riding the GREAT VALLEY PIKE all the way home to the burg.

Cruising and watching the sun go down, I had just the perfect distance left to complete my 1000mi weekend :clap

Rolled through Woodstock and spotted some metal panniers at the Sheetz. I turn in and who do I see but...TWO HAWKS! :wave

We stop and chat for about 20 min and watch the high school kids roll in and out of the popular hang out spot. Eventually, I relay that I must get home before dark and Rt11 takes a while (so do my pics) so we split ways after promising to meet up at the next camp out.

The historic mill in Edinburg, VA

I slept great and was ready to work in the AM...though riding is always more appealing.