I left work early on Friday for Laurel Fork. There was a large wall of heavy rain and wind directly in between camp and myself and I was prepared to ride through it to get there. Just another weekend in WV.

Leaving Arlington I spotted this ridiculous outfit. I wonder if he/she ever considered this as their occupation.

Sat in some terrible traffic until it finally opened up and I sailed out 66 the whole way to get some mental distance between myself and the hustle and bustle of the city.

Approaching the wide plains outside Petersburg, the wind picked up significantly and the rain began to fall. It was shortly after this picture that I was nearly blown off the road by a wind gust, the amber flashers of the truck in front of me reflecting off the glassy asphalt. Rain drops so larger stung through the Roadcrafter fabric of my suit.

Made it to Seneca Rocks for a 6 pack of Flying Dog and to put on a layer. The rain and cool weather usually lead to my heated jacket or a wool sweater. 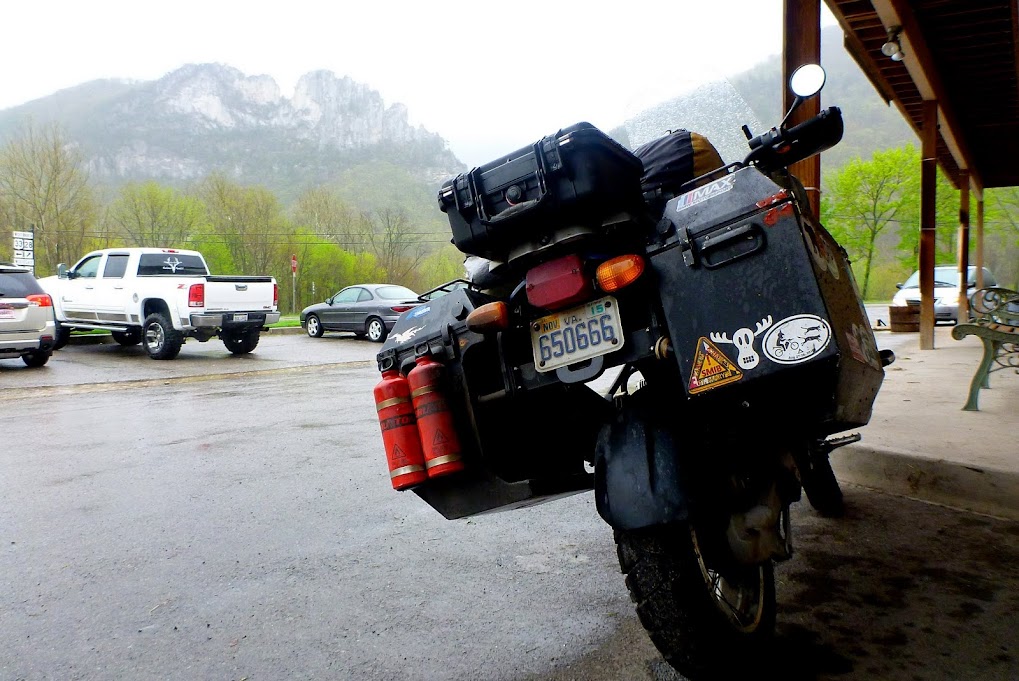 I made my way along 33 through the mountains behind a number of slow moving vehicles. This turned out for the best as the recent rain and change in temperature left many blind corners littered with rocks and fallen boulders. Shortly after I turned onto Middle Mountain Rd for my biyearly roar down to camp, I hit some washboard and immediately recognized the familiar bounce and crunch of my erstwhile adolescent Jesse case in rebellion against my efforts to latch it.

After some familiar conversation and roadside fixes, we were off albeit somewhat more subdued lest I have to hike down a ravine the following event. 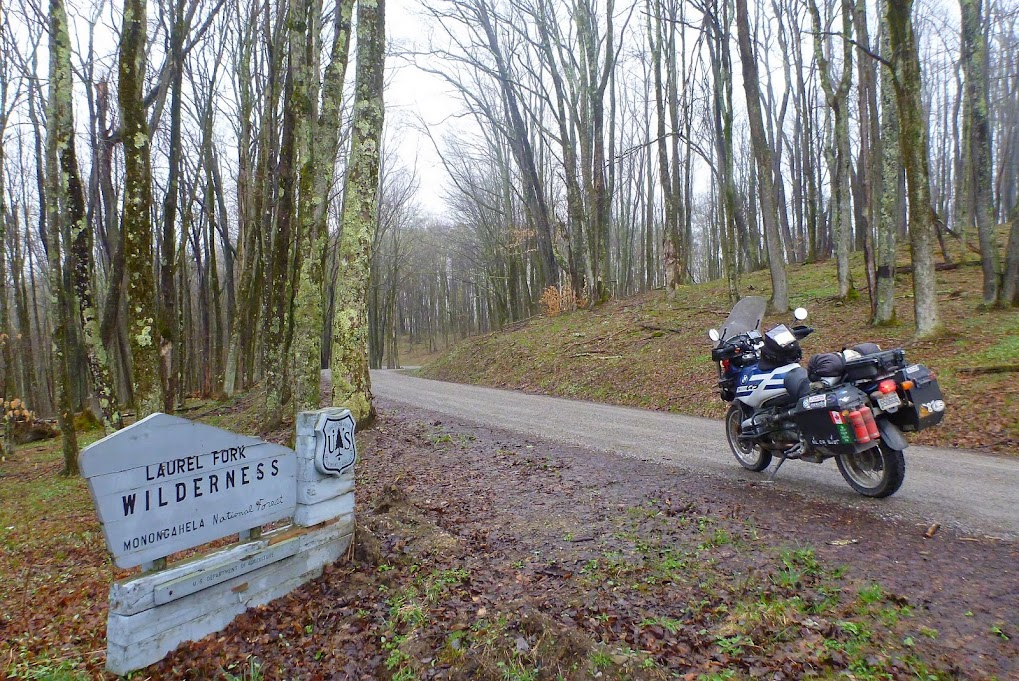 Made it to camp after the rain had stopped. I set up my tent with Reb Rider offering fresh coffee and moses stirring his bean soup 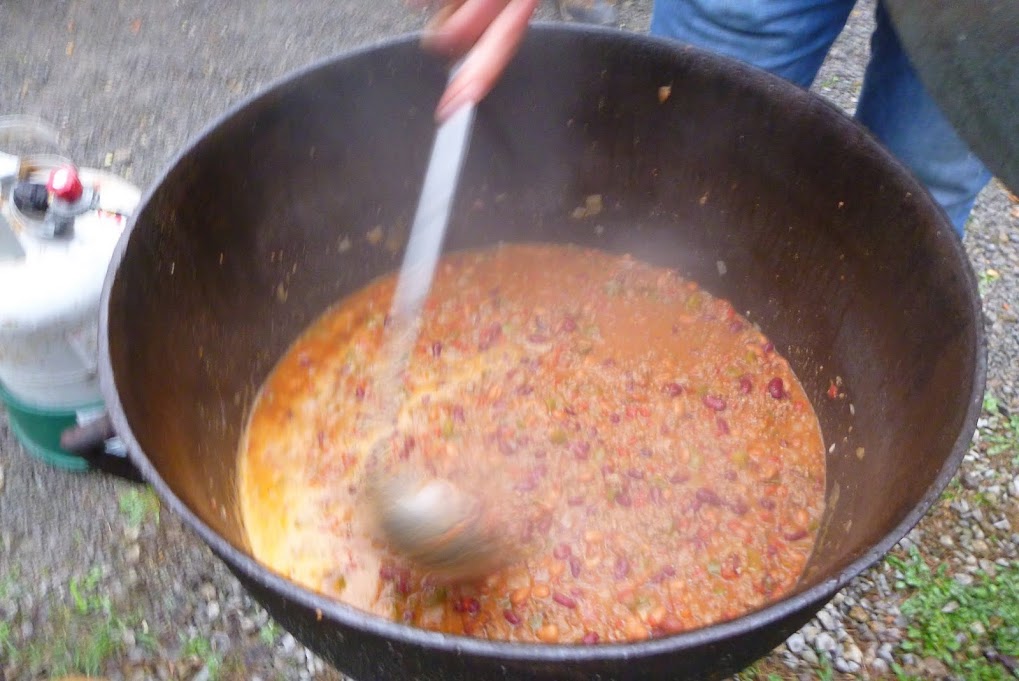 The sunset even made a small appearance. 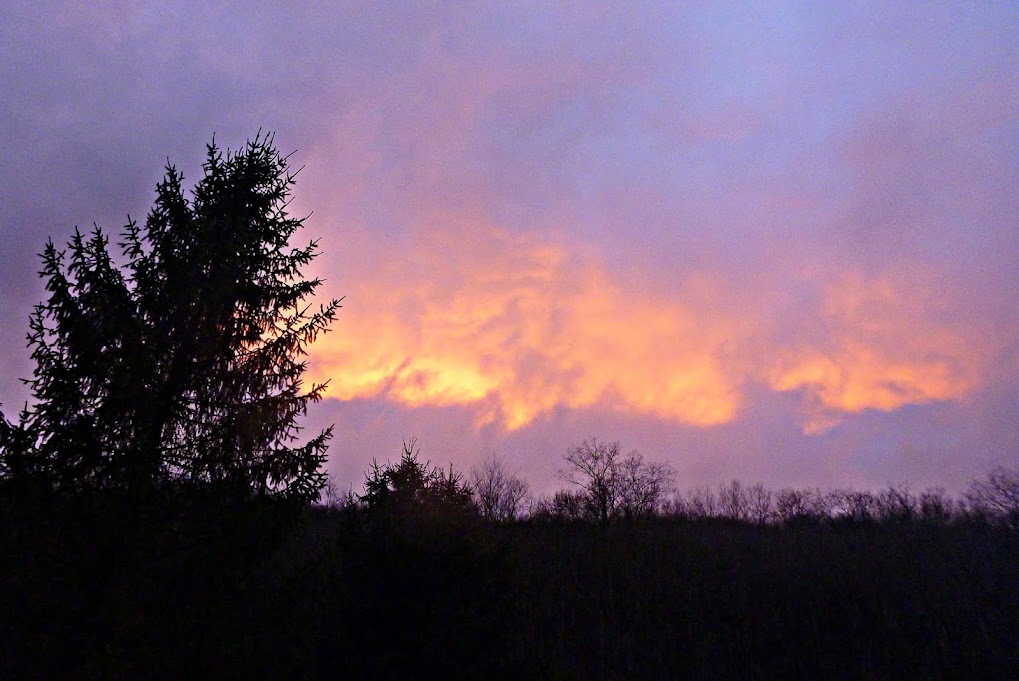 As did the Pumpkin Roll Theif

Had a good time relaxing around the fire and not being soaked as usual at LF.

I really like to wake up, pack up and ride. Since I would be coming back to camp, I was outta there at 7:30 or so. I often ride with others but just wanted to get some miles in under my belt and not have to stress about others keeping up or following me, Captain U-Turn around on some aimless photo safari.
Starting mileage that AM:

Heading out on Glady Rd.

I rode Old Rt33 which afforded me some nice views of the river and some areas overlooking Corridor H after crossing. 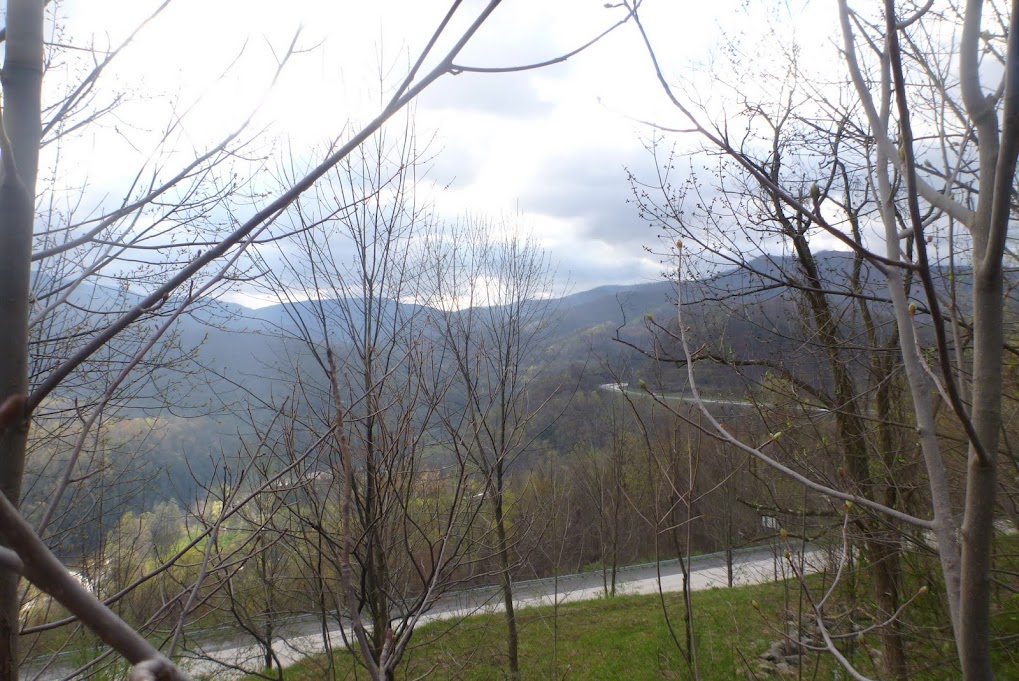 I made it through Elkins stopping for gas and a quick OJ and bite to eat before turning in Beverly for the Battlefield at Rich Mountain. The huge quarry along the roadside:

Top o' the mountain and former site of a home. 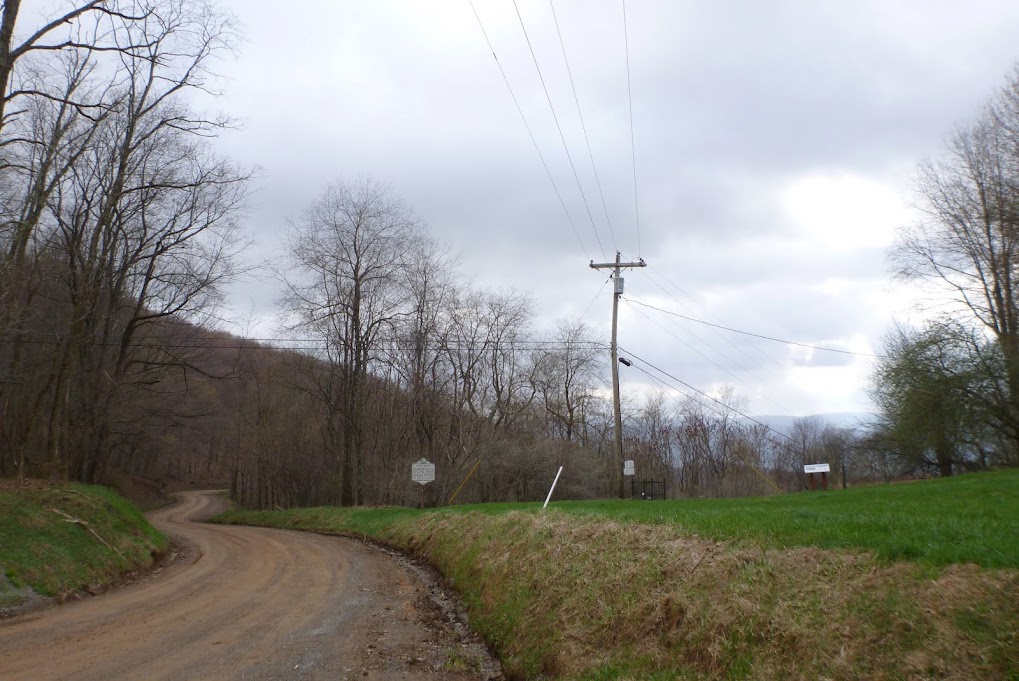 Hmmm Parkersburg...never been there before but always followed the old turnpike roads. Sounds like an interesting place to visit today. It is only 9:00 anyway.

Stopping along the banks of some unknown creek to smell the daffodils all in a row. I wonder if someone planted them here long ago. 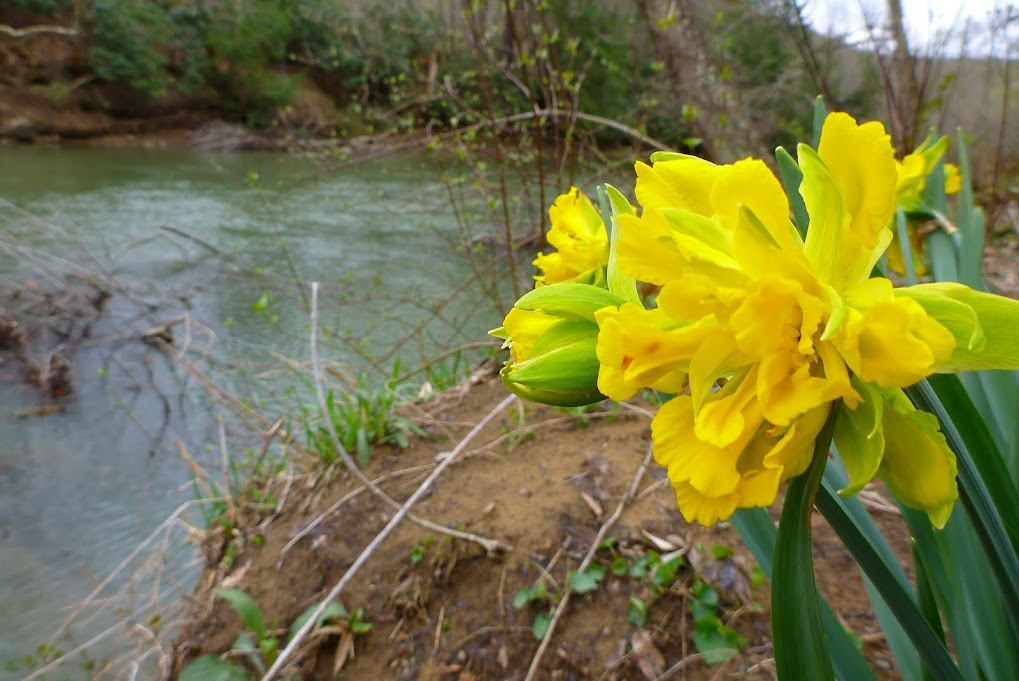 Much of the area has been crossed with gas wells and timber cuts. I saw these banners in many places like some motor mile annex in the woods. Dirt for sale. SUNDAY SUNDAY SUNDAY!

Somewhere near Normal Rd (really a rocky and fun road)

Eventually this dropped me out on 20 south of Buckhanon. Spotted some Elk. 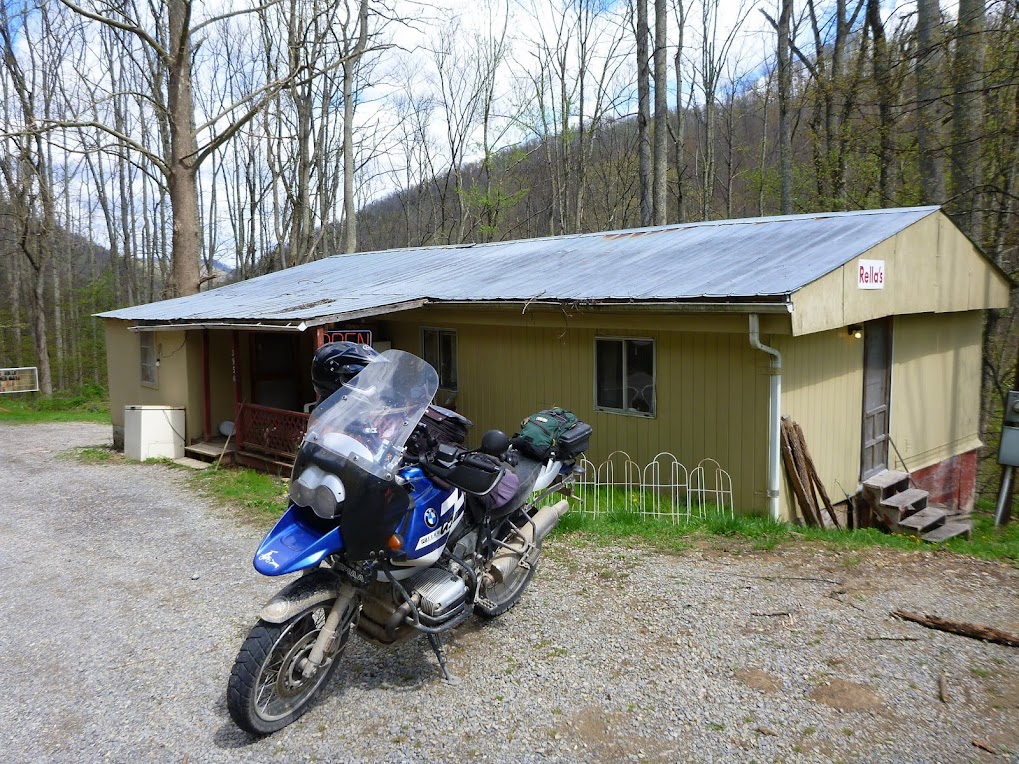 Then decided to go ask Mama Rella about it. :nod 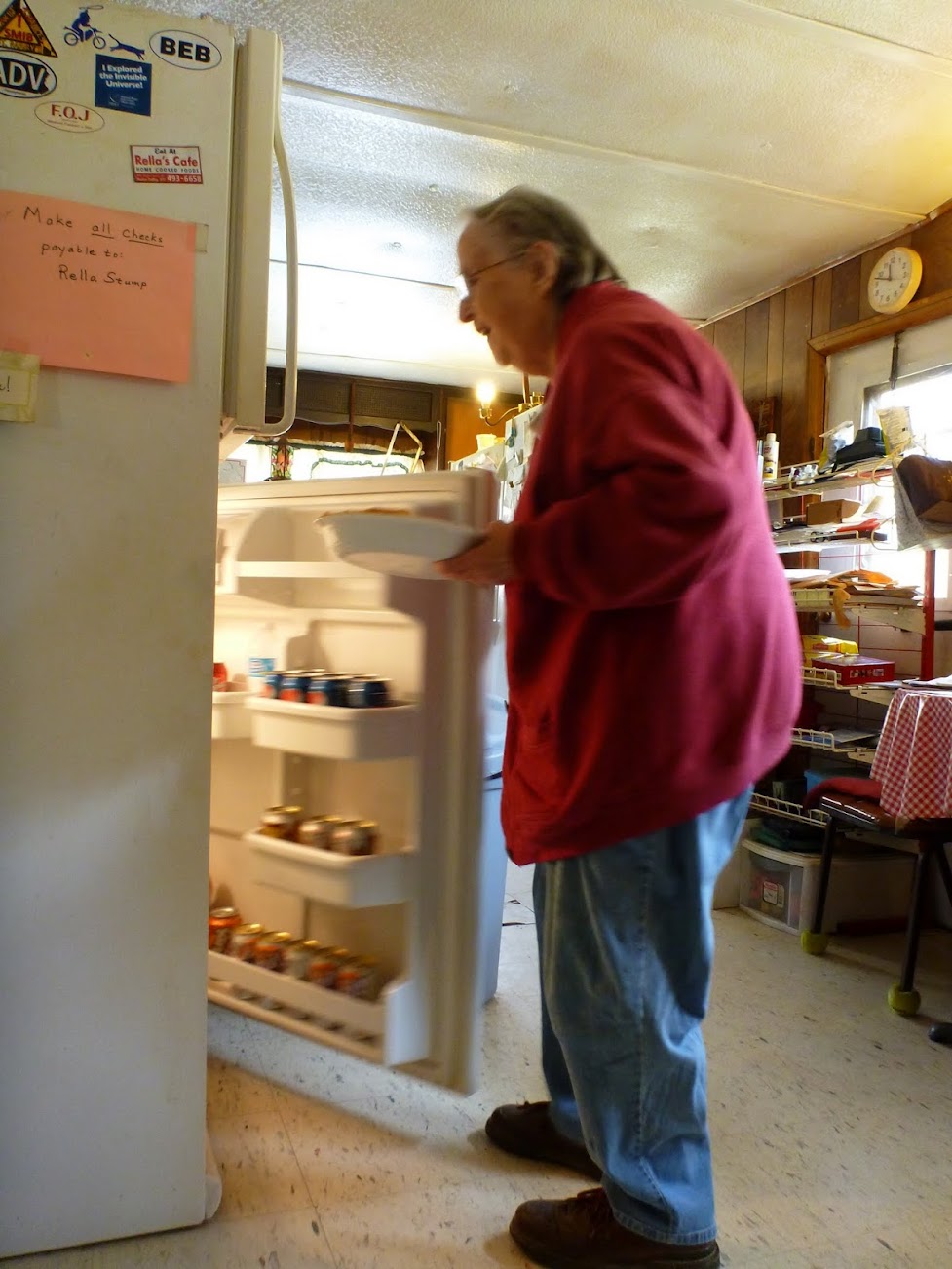 Her new house and her old burnt home. 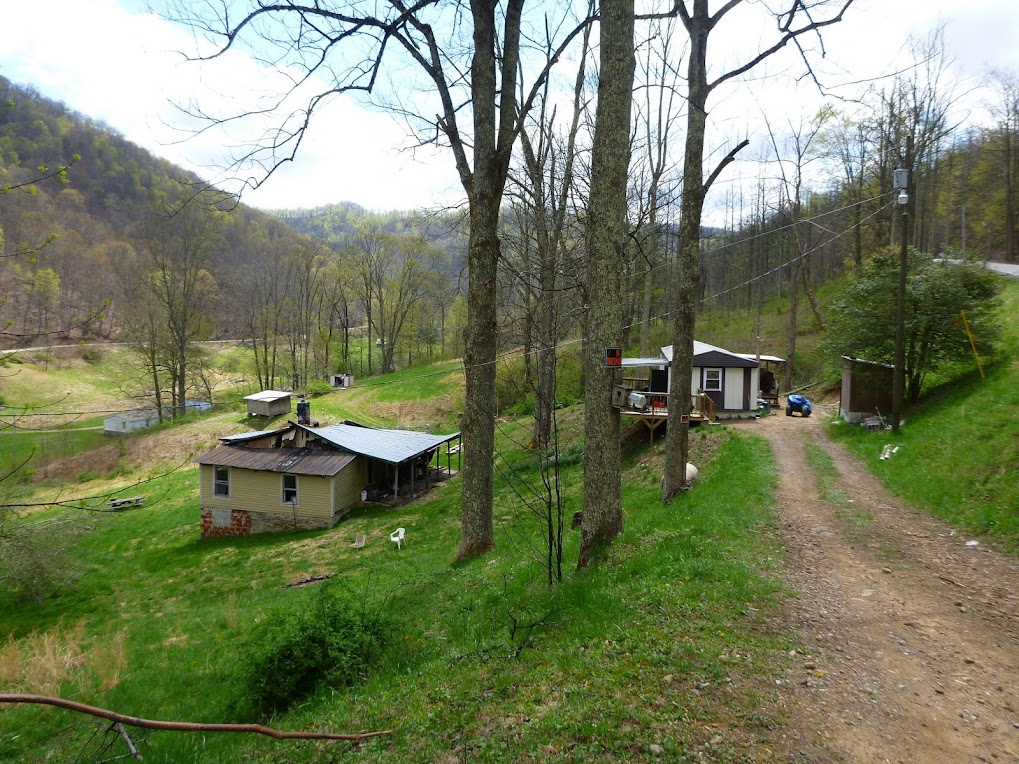 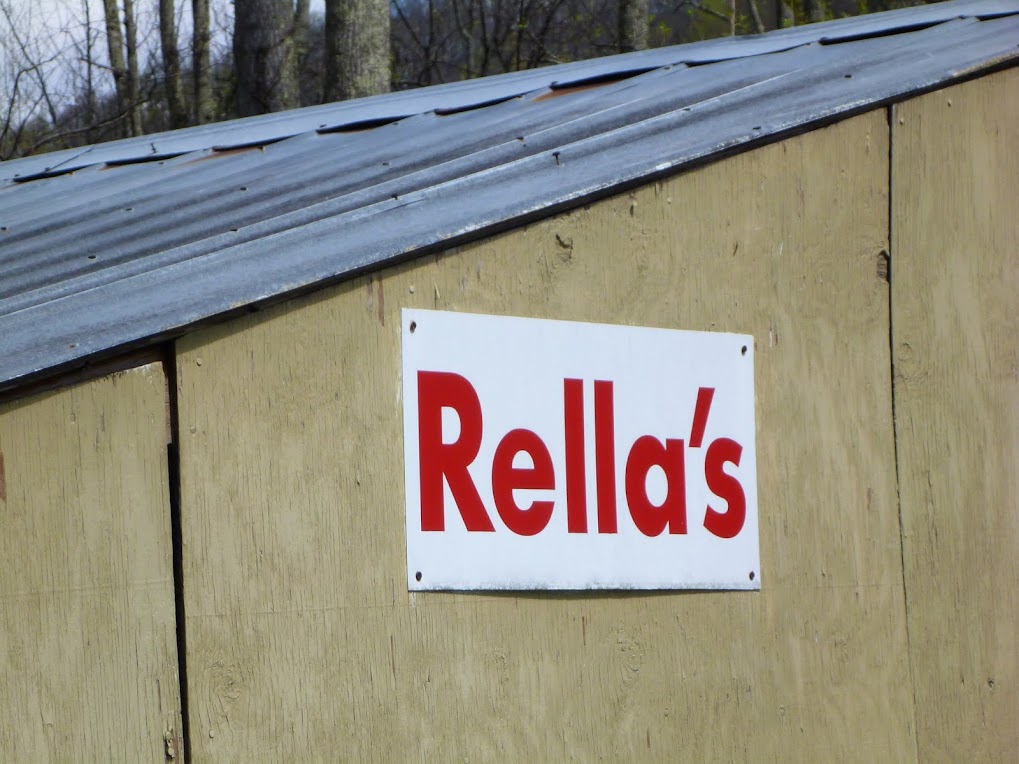 From here I just started working in a NW direction and had to do a couple U-Turns and stops to ask locals for directions. I am not asking for directions even if it usually gets me more turned around than I hoped. 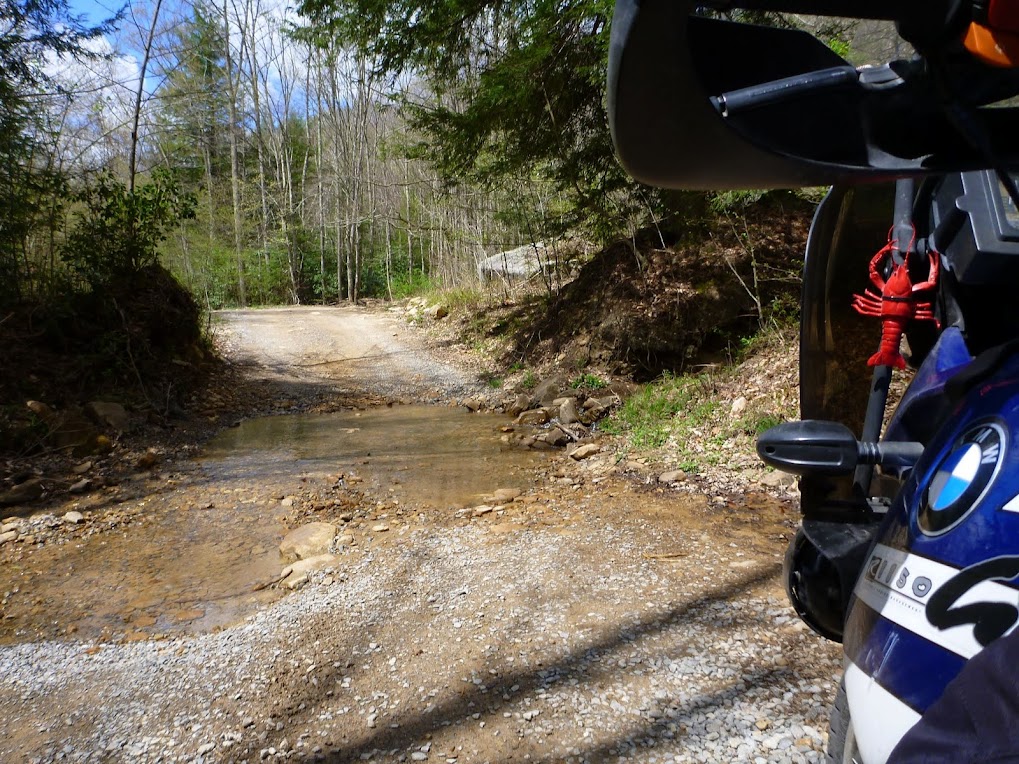 Just me and my bike 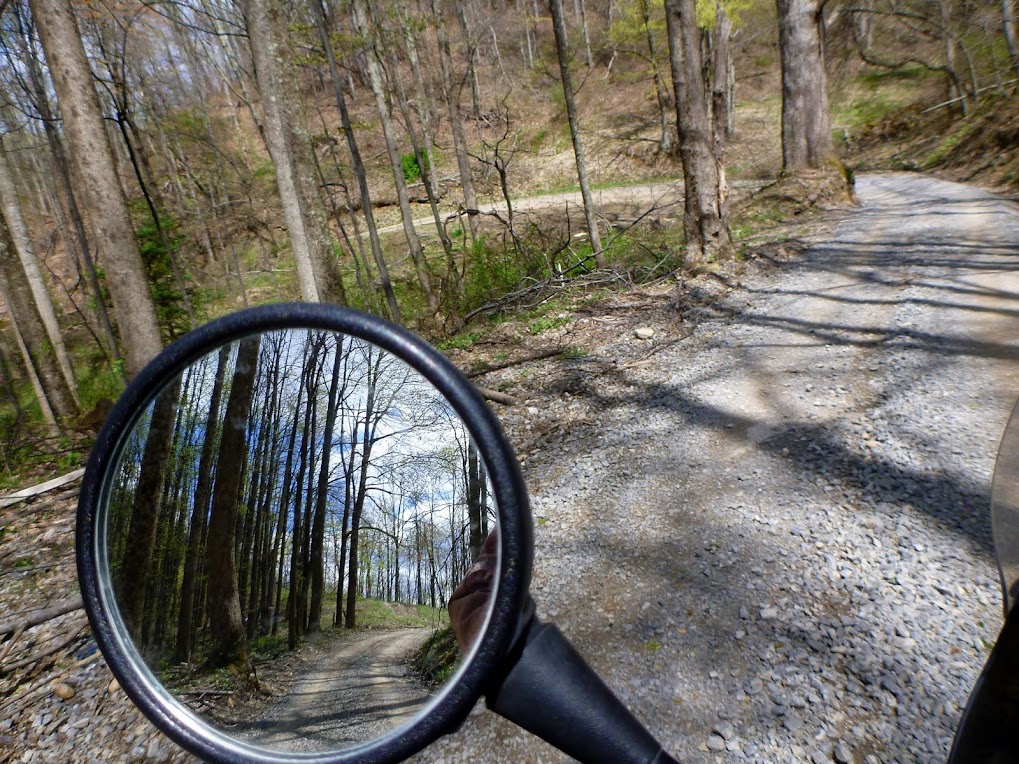 Well who thought THAT was a good idea? :huh

I ambled along until coming through the town of Weston. I immediately recognized the Lunatic Asylum from many TV shows and historical bits about it. I had to explore a bit more. 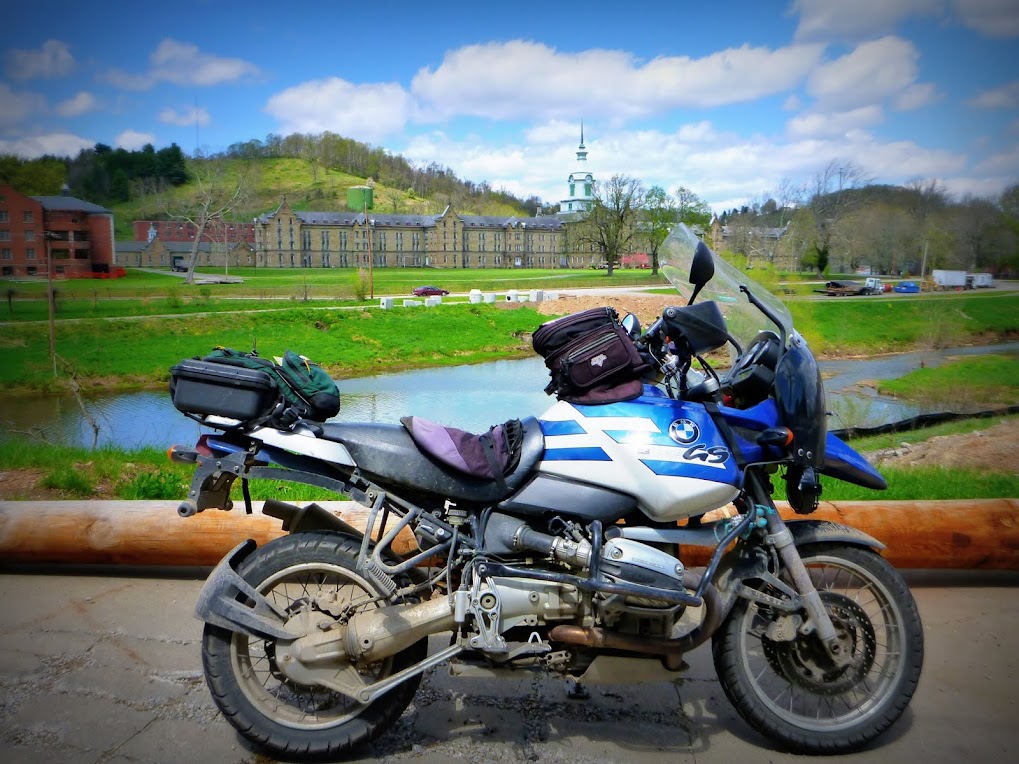 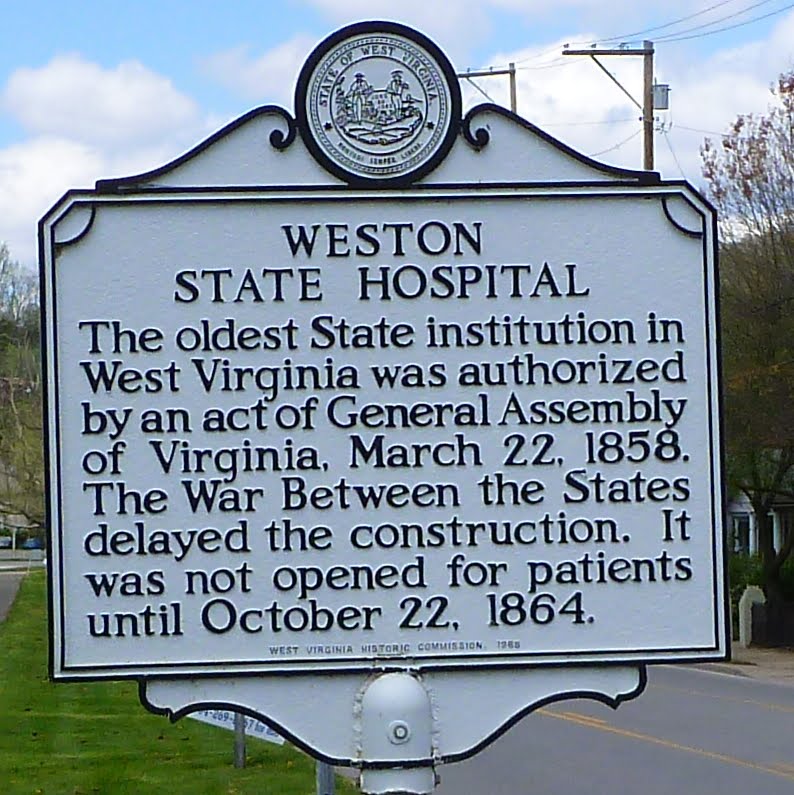 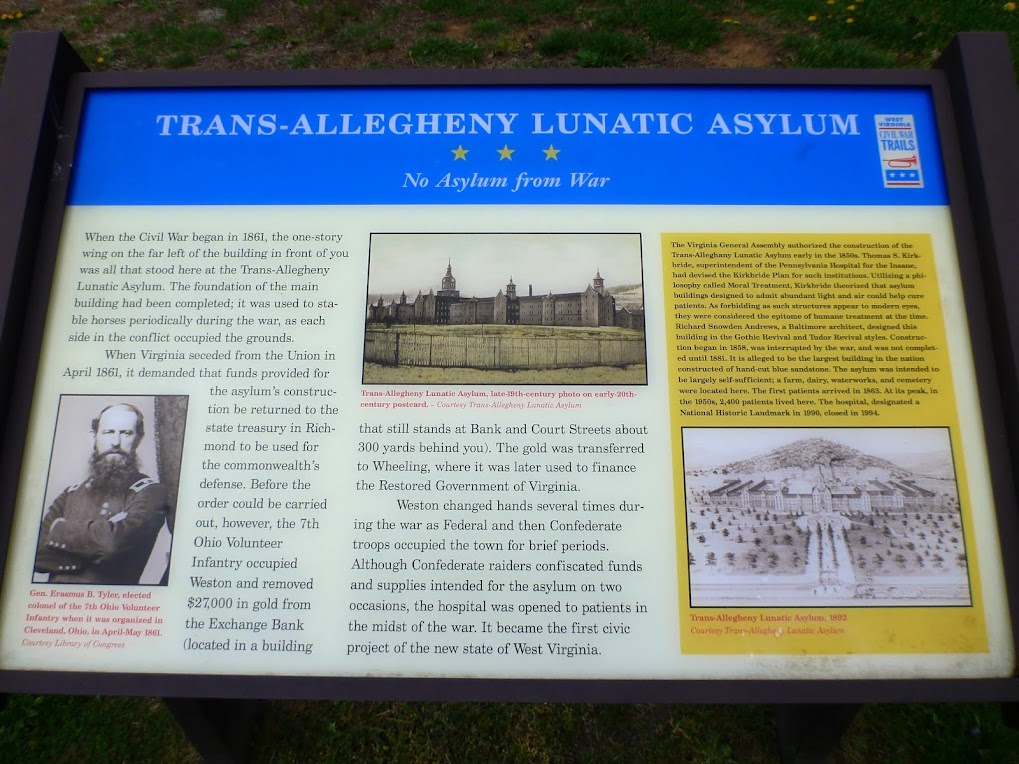 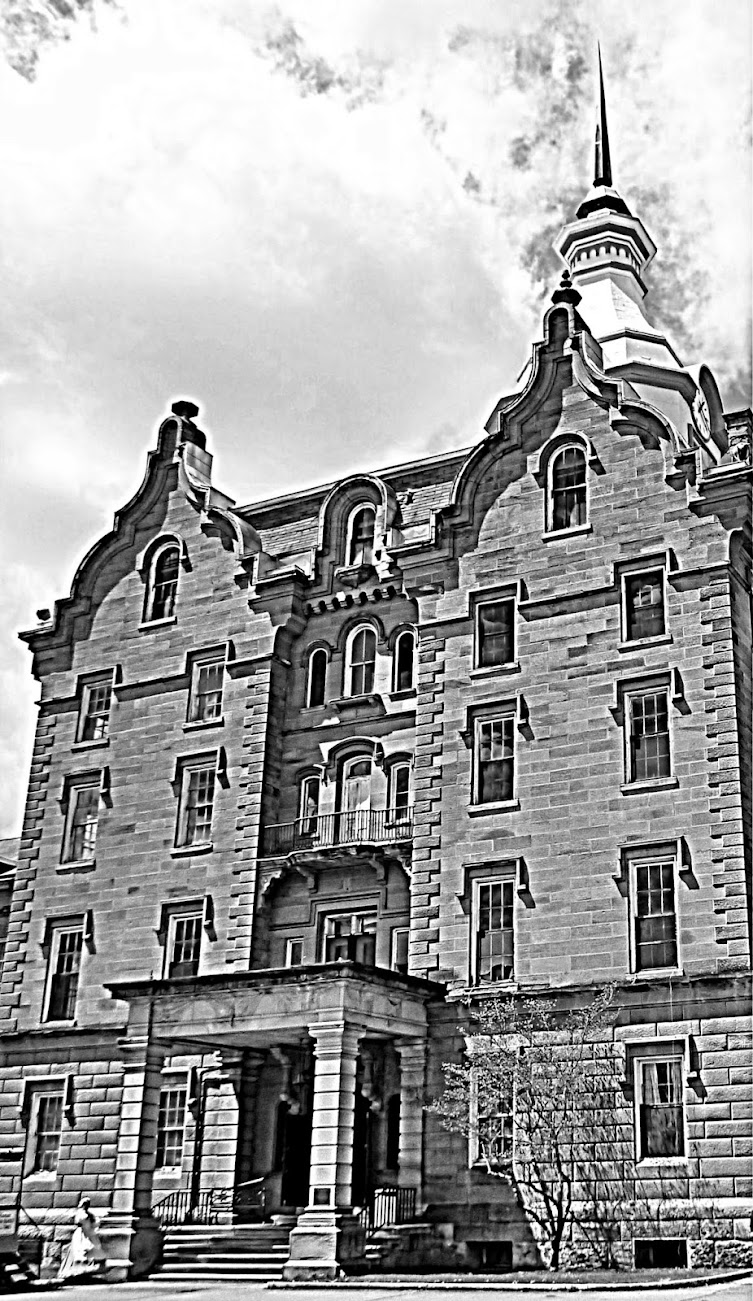 After passing through town I wound along some old country roads through farmland occasionally catching up to a group of cars then stopping for pics or a snack then catching back up again. Good times best for one rider.

What a neat little shack on the hilltop.

Was nice and twisty

Cows in the corners. Gotta watch out.

Beautiful small valleys and so green compared to the dreary winterlike environment higher up near camp.

Wound up on US50 - the big mother road once upon a time. I decided to sacrafice a bit of slab time through beautiful country to zone out and eat up some miles on the way to Ohio. The dirt and harder stuff of the morning had me a bit tired and ready for a mental break.

Made it to Parkersburg and immediately stopped at Tim Hortons. I love these and make me feel like I am in Canada. 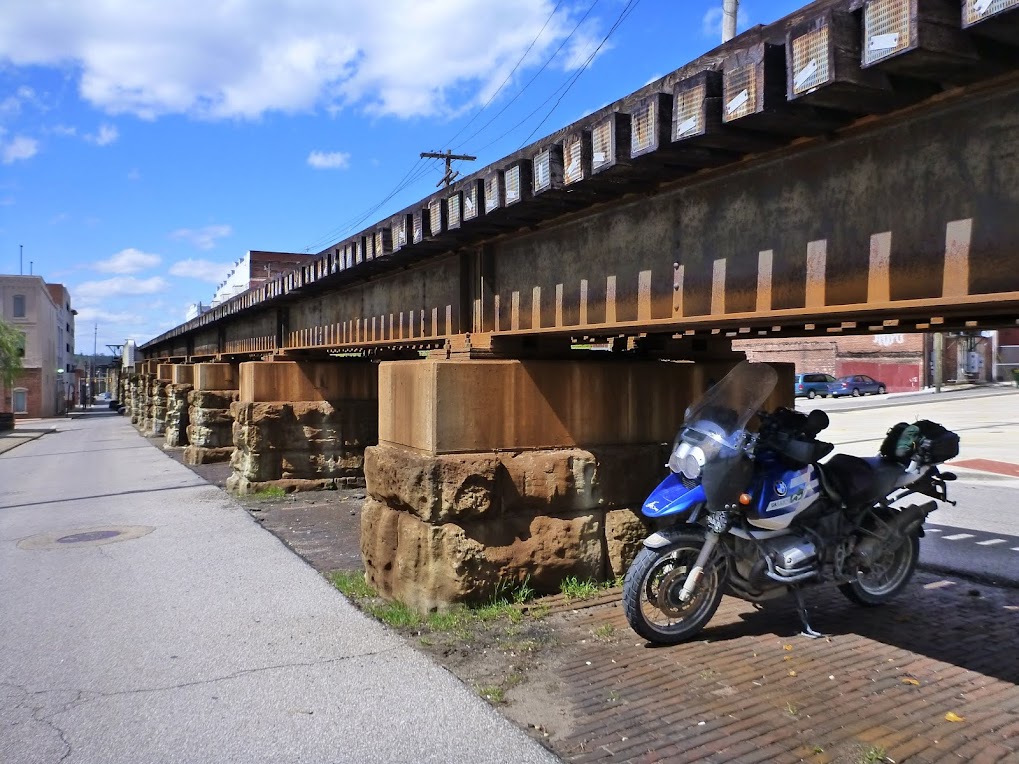 Oh why the hell not.

Why thank you. Hello Ohio. Haven't been here on the GS yet.

Neat bridge crossing the river on the highway.

Cruising along the Ohio. Who'd a thunk this is how LF would turn out for me :dunno 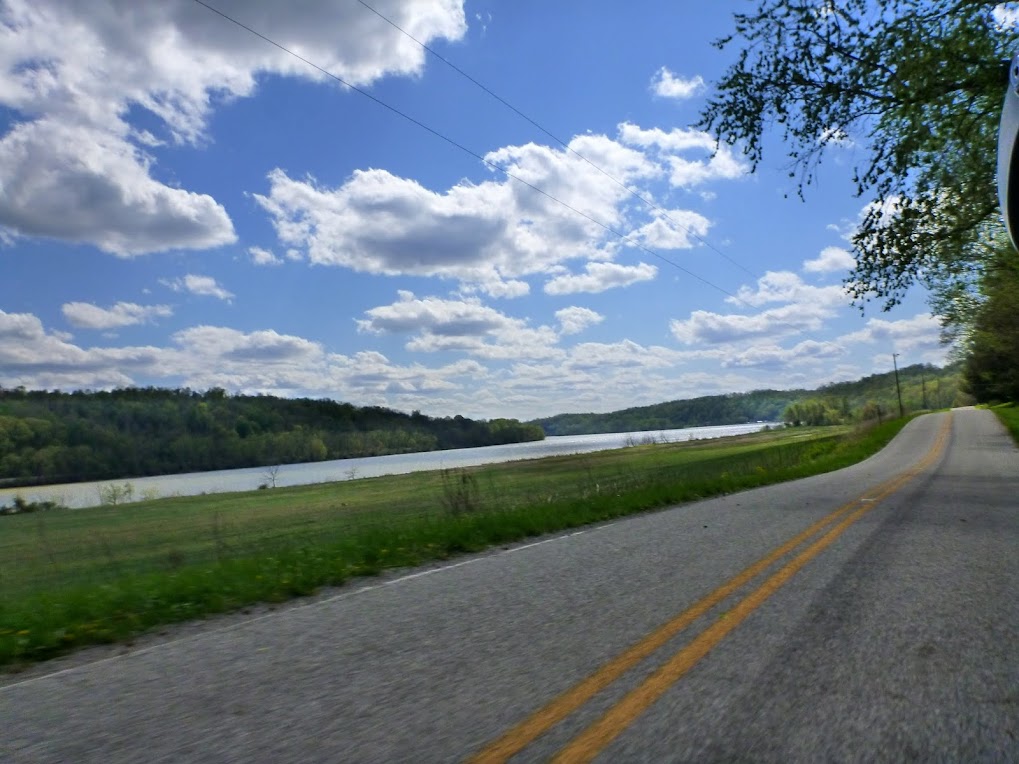 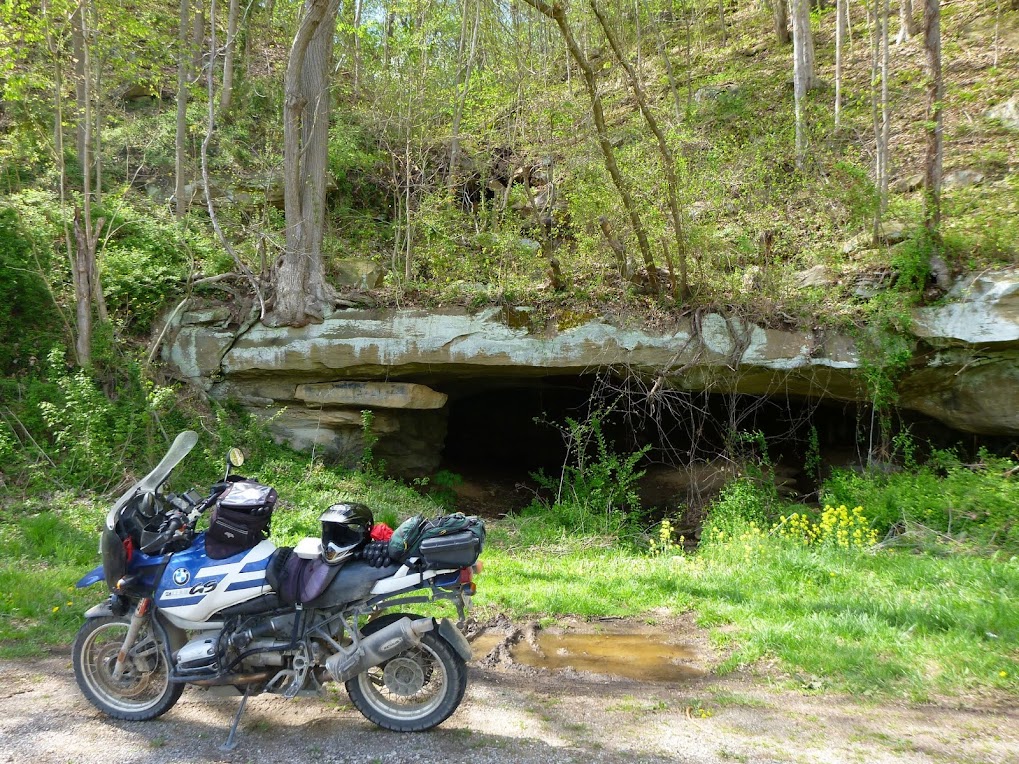 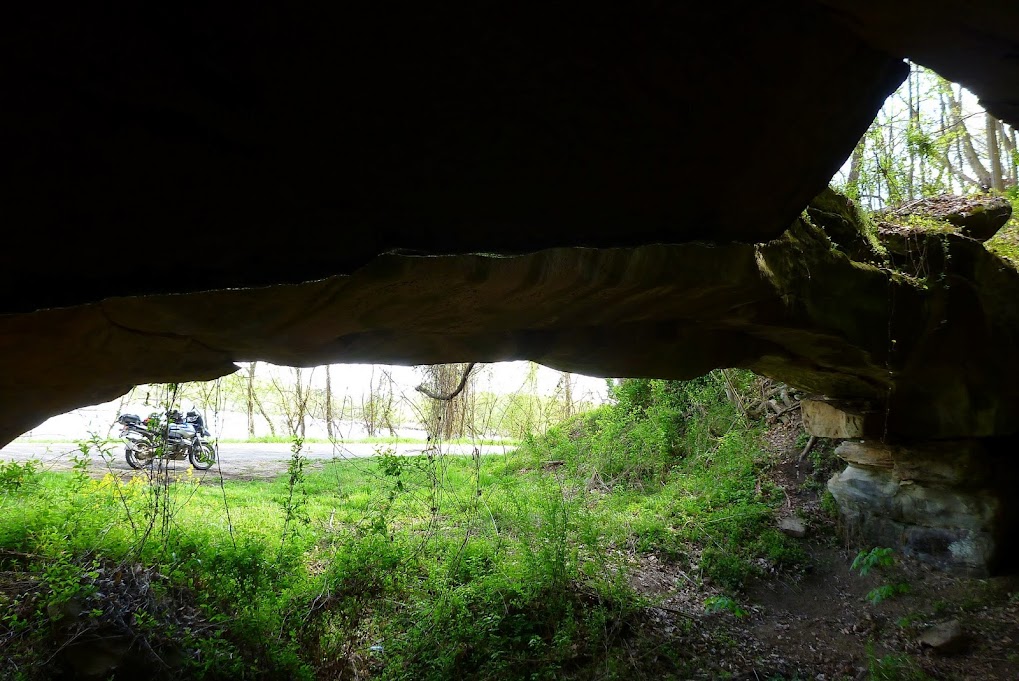 And back on the road. There were some nice homes along the western bank of the Ohio. 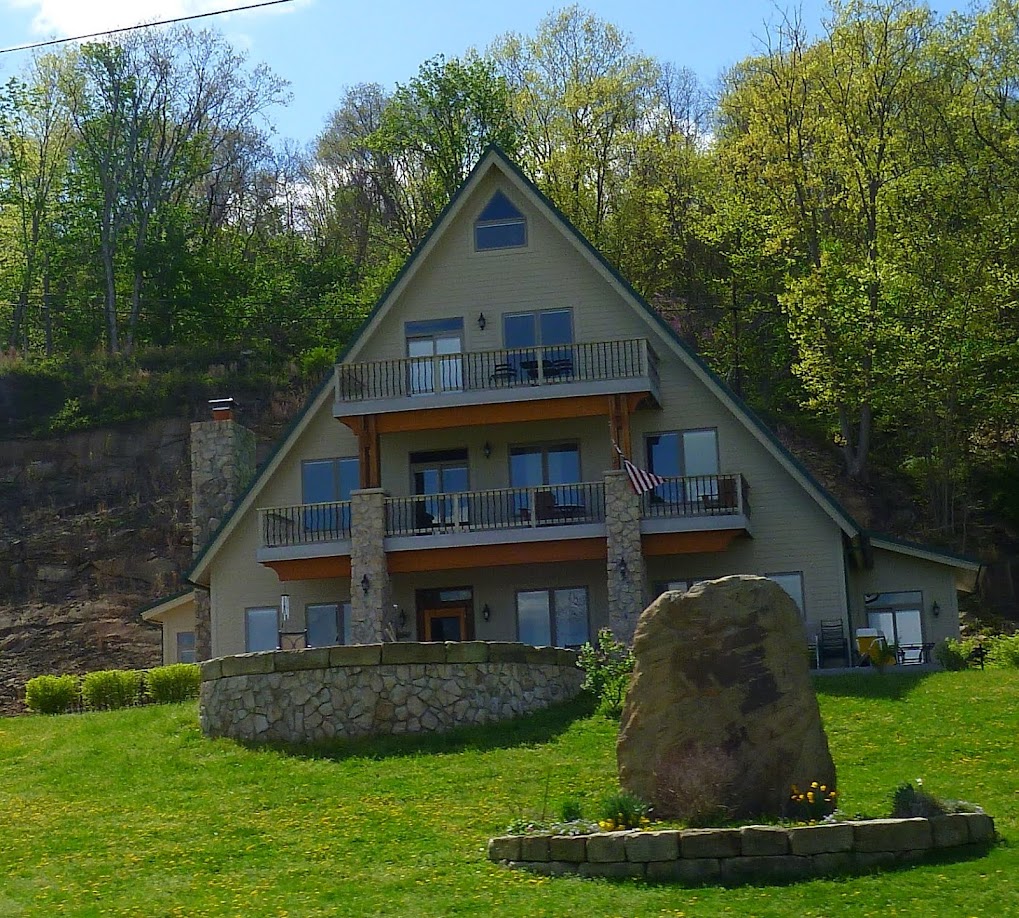 Including where I feel most at home.

Cruised down along the River Rd and enjoyed the small towns and great views in the spring sunlight.

Named after his ol'lady I presume.

Quite a large barge moving cargo along the river. Coal perhaps?

Down near Ravenswood I crossed back over the river. 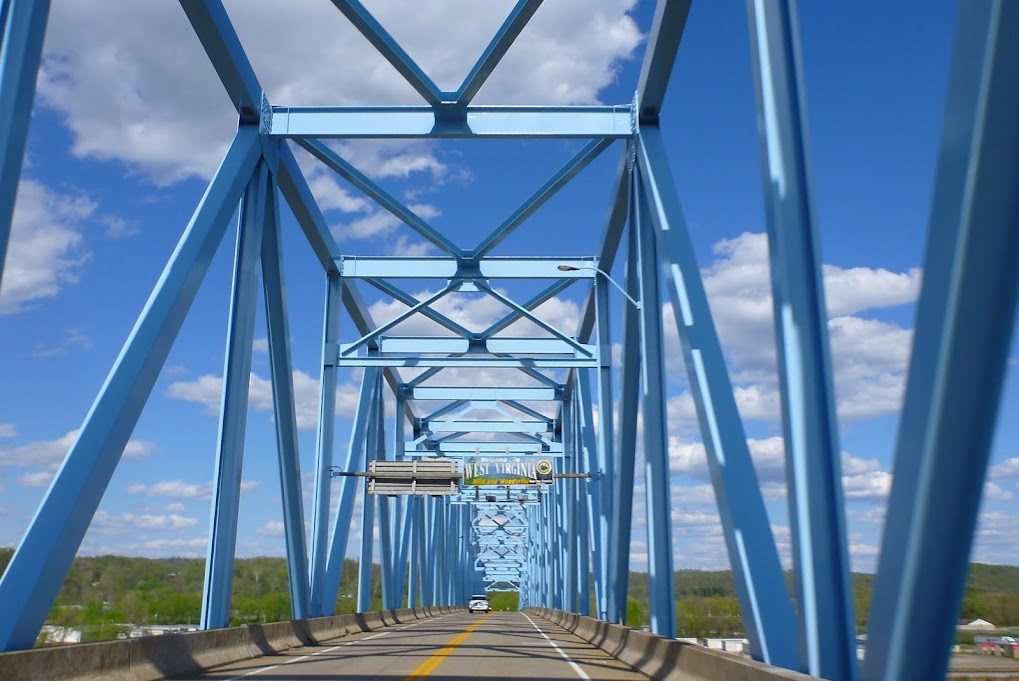 Sad lil Ponton in the mud 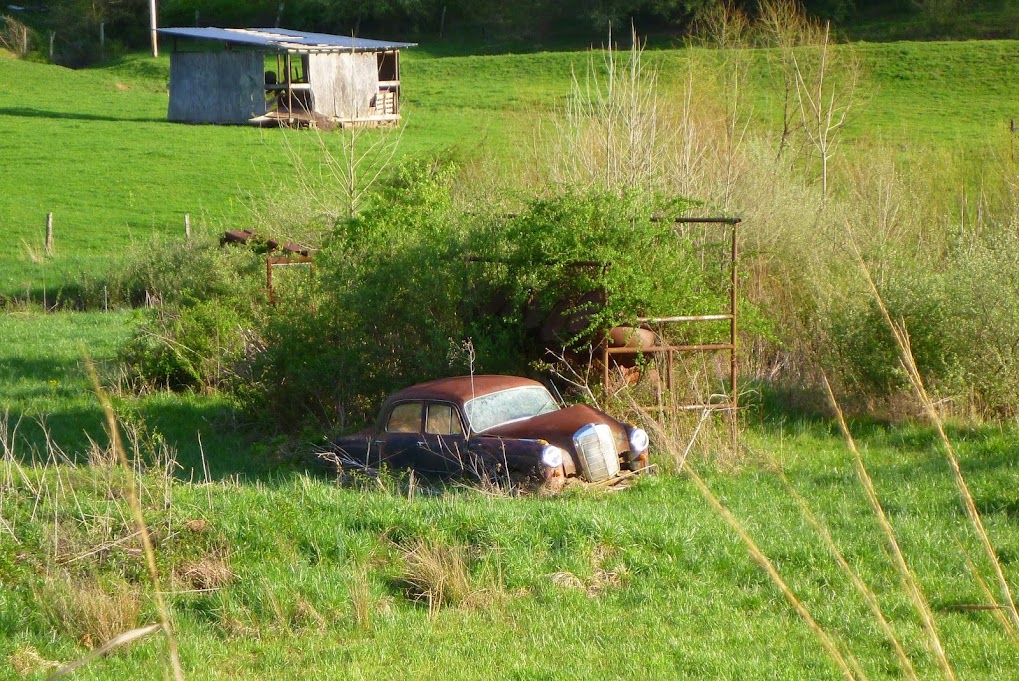 Chasing my shadow. Life is good. 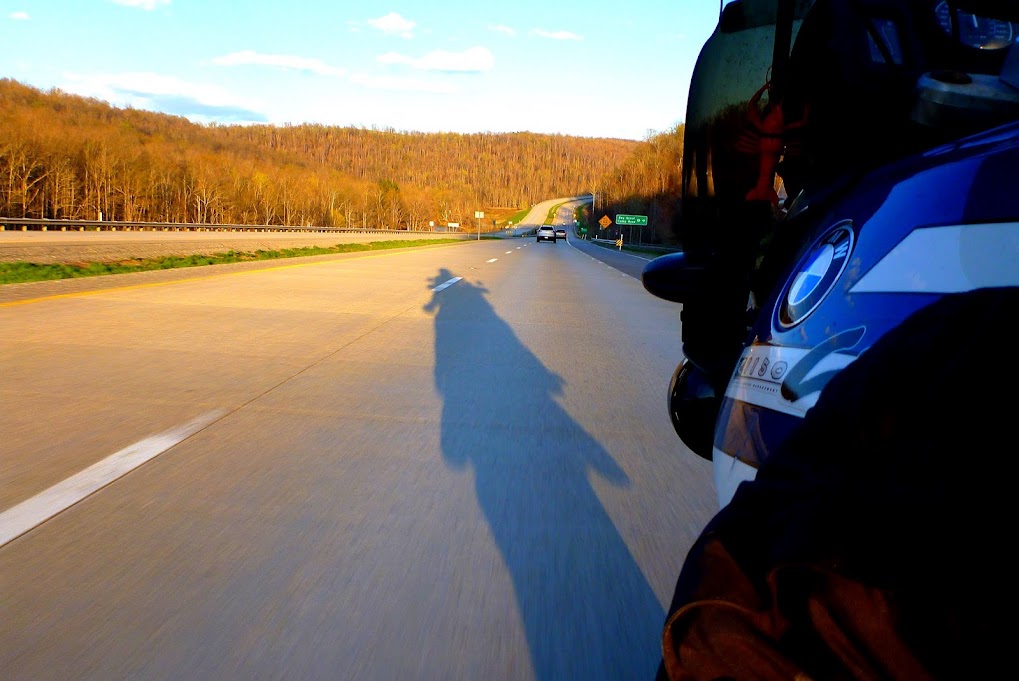 The fading light combined with the red color of the shingles made for a great warm shot of this church in downtown Elkins. 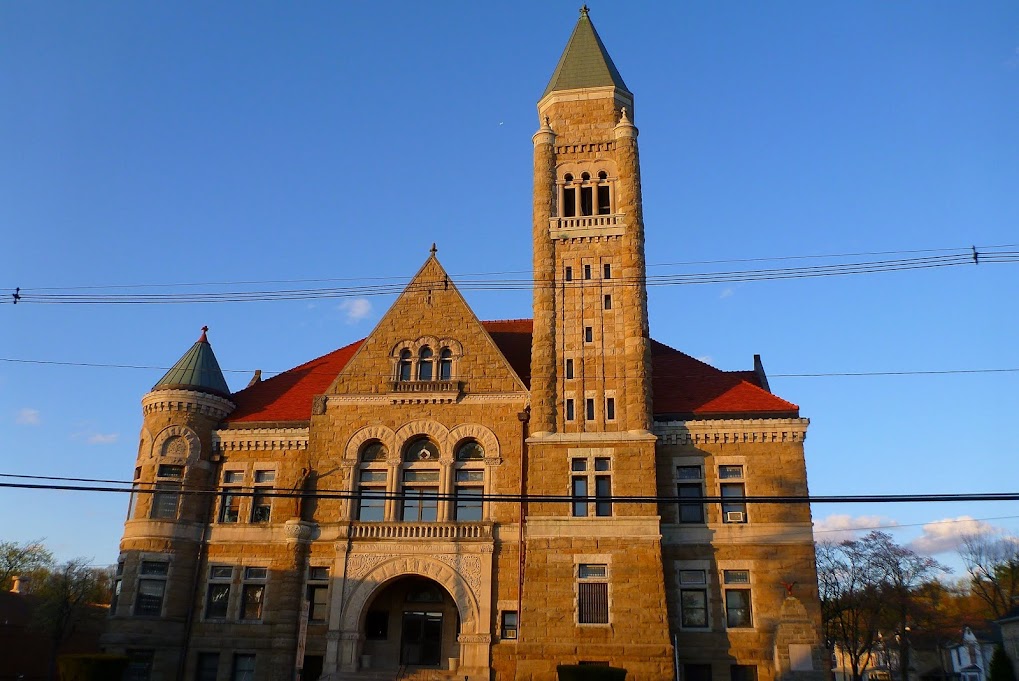 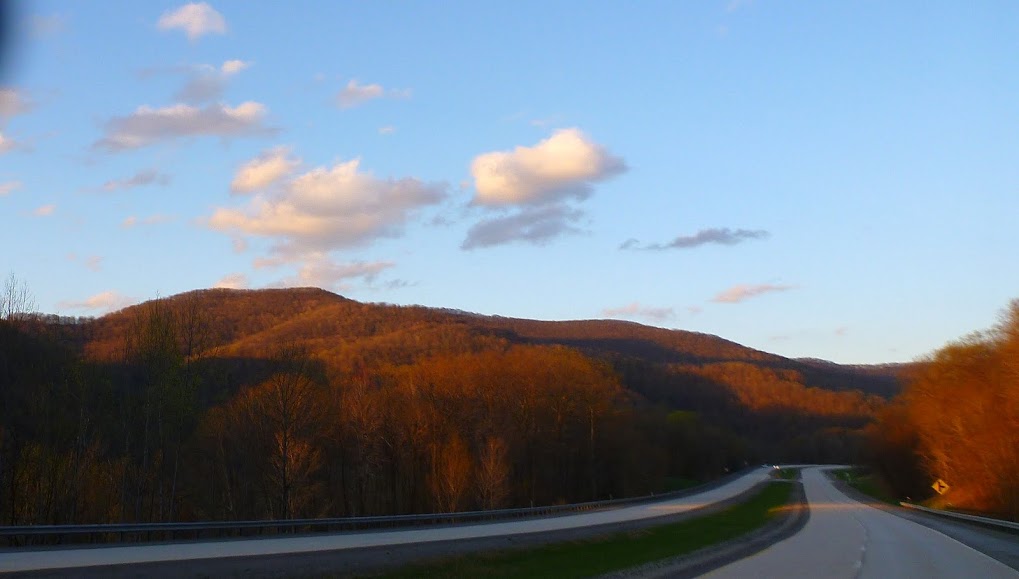 And finally back at camp for some food, beers and much needed rest :1drink

Someone thought watching a movie was a good idea. Novel indeed.

SUNDAY
Yeah that is ice in my cup 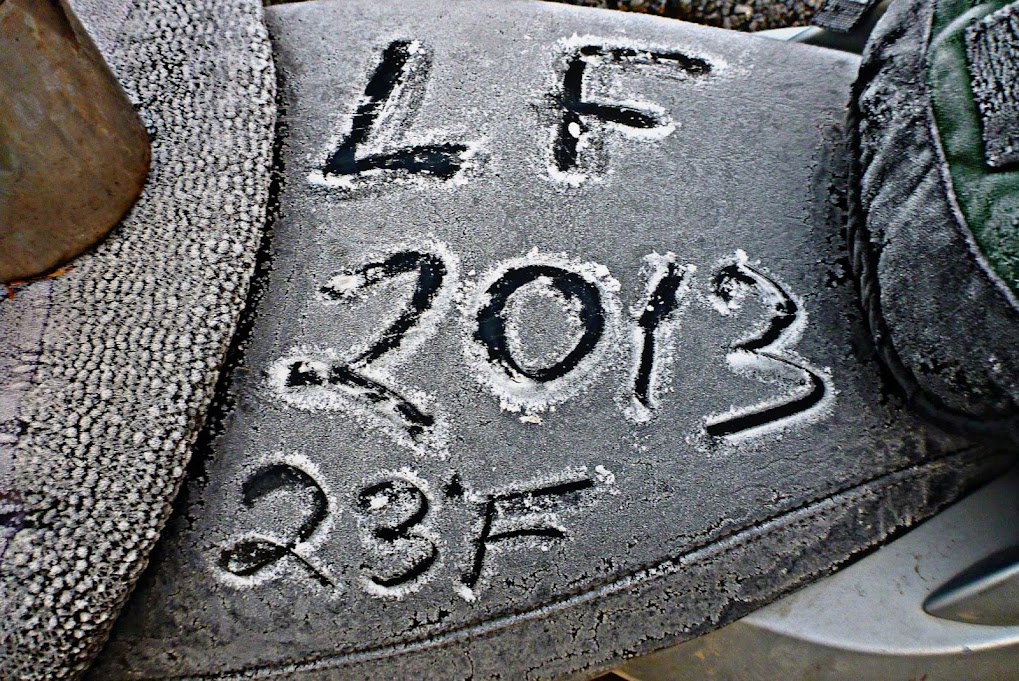 Even she was cold and shivering.

Kevin made her a leftover biscuit treat.

Kevin also warmed up the shitter.

I'd say it was a chilly start to the day.

One thing is for certain, the eggs kept overnight.

I decided to hike up Laurel Fork in search of a plane wreck I've read about. This is the first of a few beaver dams along the creekside trail.

Eventually I came across an exhaust manifold :huh

Not five minutes before this shot, a large buck walked along the hill behind me. Beautiful quiet morning to observe nature.

I have no clue. Raccoon perhaps?

I made it back to camp and decided to have a nice lazy ride out with Evil Chucky and crew. They can be seen in the middle of this shot.

I spotted this on Lower Timber Ridge Rd

Wound up at the Fiddle for a bight to eat.

I don't know what happened to those pics but can't find em at the moment :(

Anyway, here I am heading back to camp on Middle Mtn when I came across HPZ putzing along.

I returned to camp and found this. My tent had blown over in the winds earlier in the day but someone had left me a cooler of beer! Great friends :clap 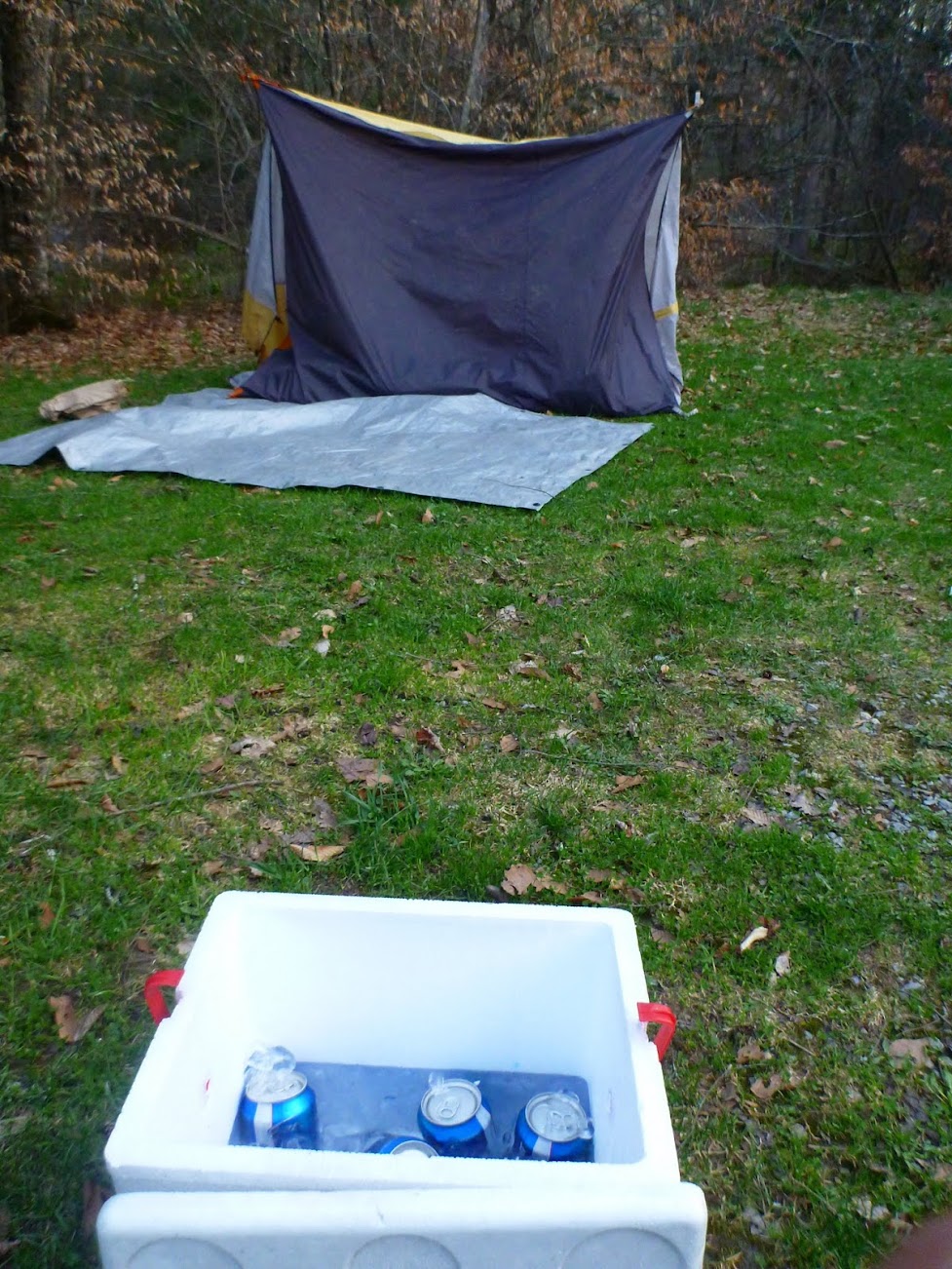 I quickly set to making dinner.

Heading out along Gandy Creek I believe

A stop at the Aldi Dam

And finally home to work for the rest of the day.

Thanks for coming along! I have one more to put up from my trip to Lake Ontario. Stay Tuned!!!