I slept cool in the Hammock, only waking at 2:30 to reinflate my leaking air mattress. My alarm sounds at 6, I push the snooze button on the brilliant screen delaying the chill of rolling out until 6:30. I twisted through the canyons of the Smith River, through a tunnel, and soon I crossed over the Oregon state line as the sun struggled above the nearby peaks. 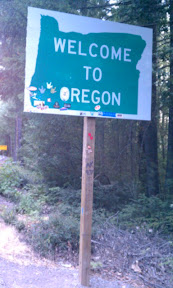 I attempted to fill up in Obrien, Oregon but the gas station was not yet open. This old Plymouth police car sat outside. 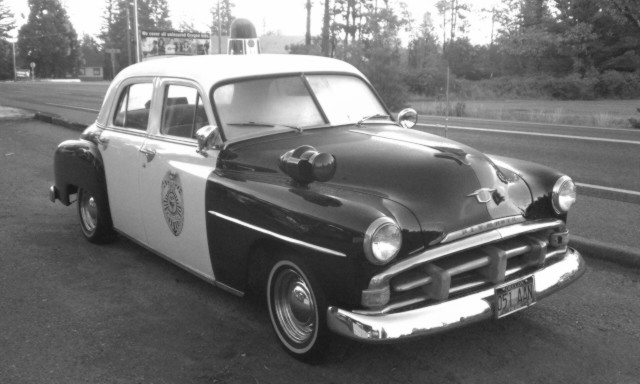 I snapped a pic of the Sunrise over a fog shrouded lake then continued to the next town for fuel. 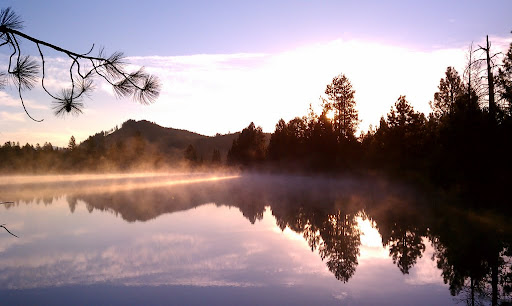 The station attendant came over to help me which I thought was rather strange until I realized that they pump your fuel here in OR. I don’t really like that so I pumped my own, unsure whether to give him a tip or not. In Grant Pass, I stopped for coffee, resupplied groceries and cleaned and lubed my chain. After repacking, I worked along the Rogue River to Gold Rush, OR. The road to Crater Lake followed the Rogue River through a more arid climate than the coastal pines I had slept in the night before. Soon, I was riding down straight roads through a National Forest of towering planted pines for 50mi until arriving at Crater Lake.

I stopped at the visitor center and jumped off the bike as a group of husband and wife Harley Riders were taking a group photo. Eager to redeem myself for the ill-returned photo at the “Welcome to Colorado” sign, they accepted my offer to photograph them. I poked through the gift store, chatted with a fellow motorcyclist inside then finally rode up the twisty entrance to the West Rim Road. The elevation around 7’500ft, the flora transitioned to struggling low flowers, spindly brush and many pine amongst the rocky landscape. When I first laid eyes upon the azure blue lake, my jaw literally dropped. 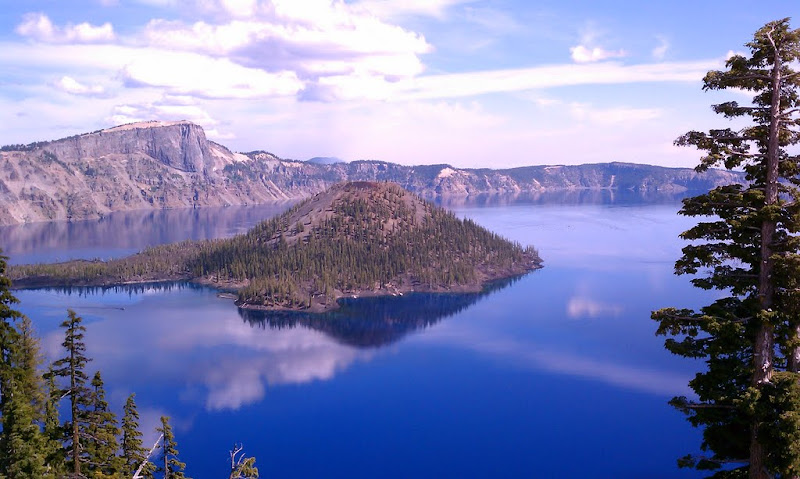 It is quite a sight from 1000 feet above looking down on Wizard Island and the ripples of the cool pure waters. The tour boat wake was mesmorizing.

I snapped some photos while stopping along the rim route and snacking on granola bars acquired during my morning stop.

These docile chipmunks are fat from their tourist-fed diet. 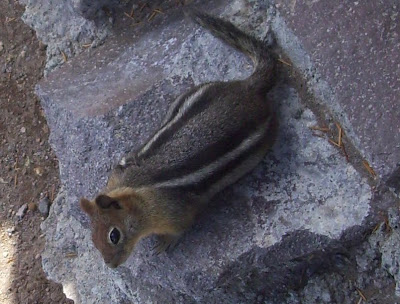 Self portrait courtesy of my right pannier 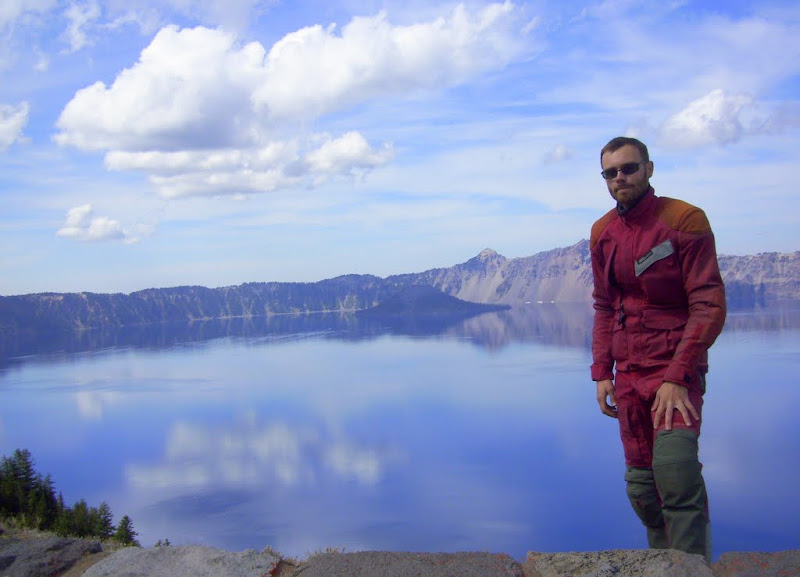 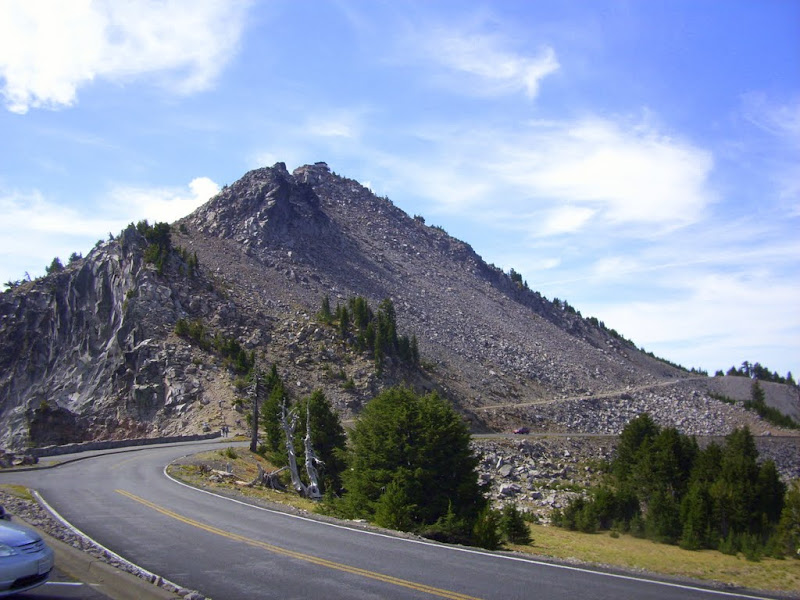 On one overlook, I met a young Swede on a DR200 purchased in Colorado, riding a three week tour through Canada then back through Nevada and Utah to CO. A very cool guy, I exchanged a card for the pleasure of signing his helmet covered in Sharpie well wishes from passing friends and travelers. It turns out he is on ADVRider.com…small world. 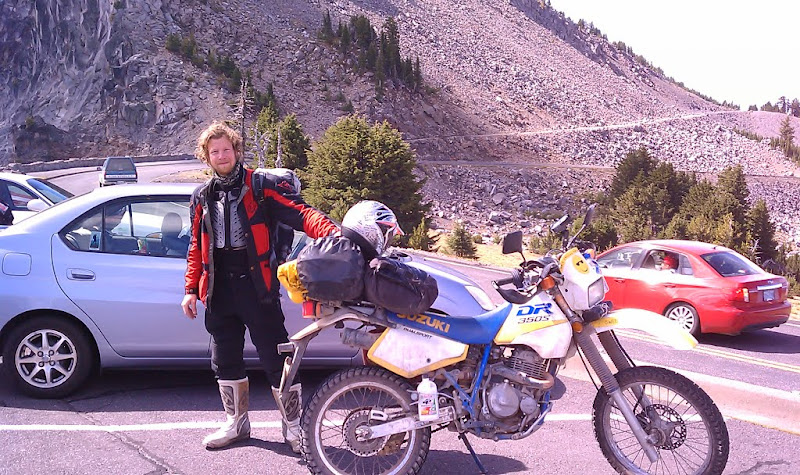 I descend from the former imploded volcano to a smoky forest fire wafting hazy smoke down the straight highway. I 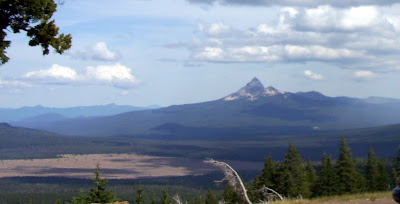 turn toward the marsh lands and smell my first Buffalo, an earthy pleasant smell quite unlike cattle or pigs. They graze in large herds beside the highway. It is a shame we killed so many in our pioneering past. 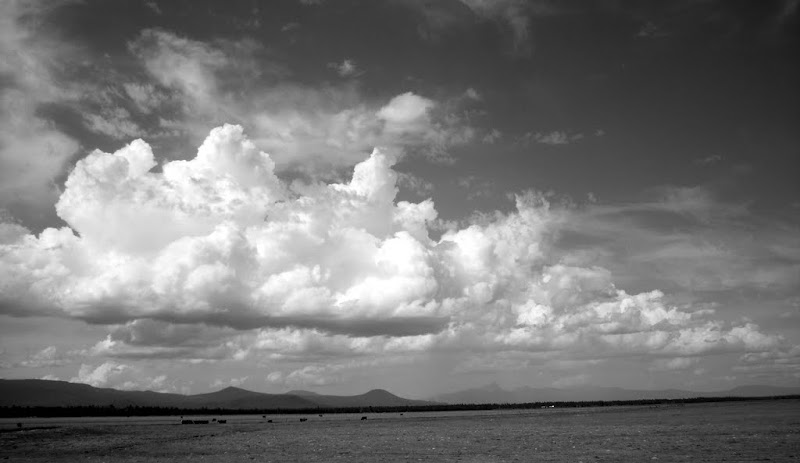 Low on gas through the Winema National Forest, I keep the speed at a constant 50mph drone and play around on the GPS looking for the nearest gas stop. 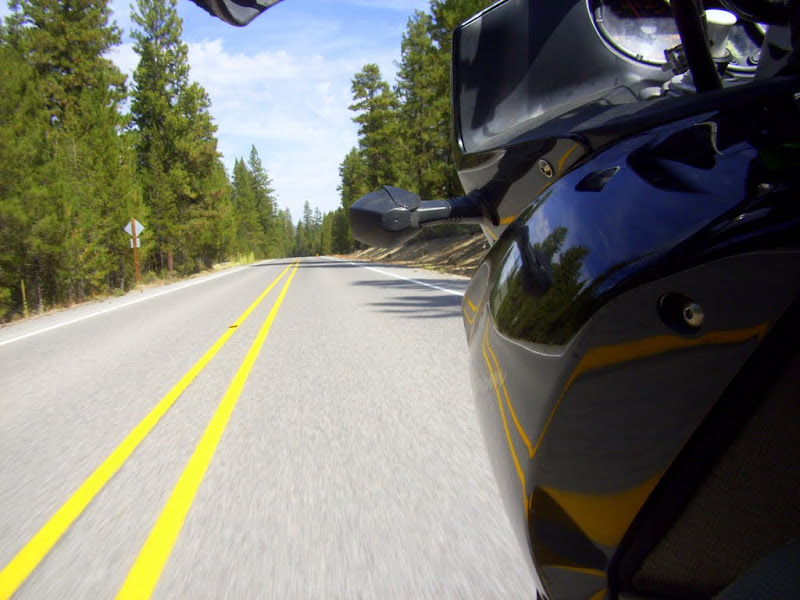 It is not looking good, they are all in the opposite direction I am travelling by 50+ mi. 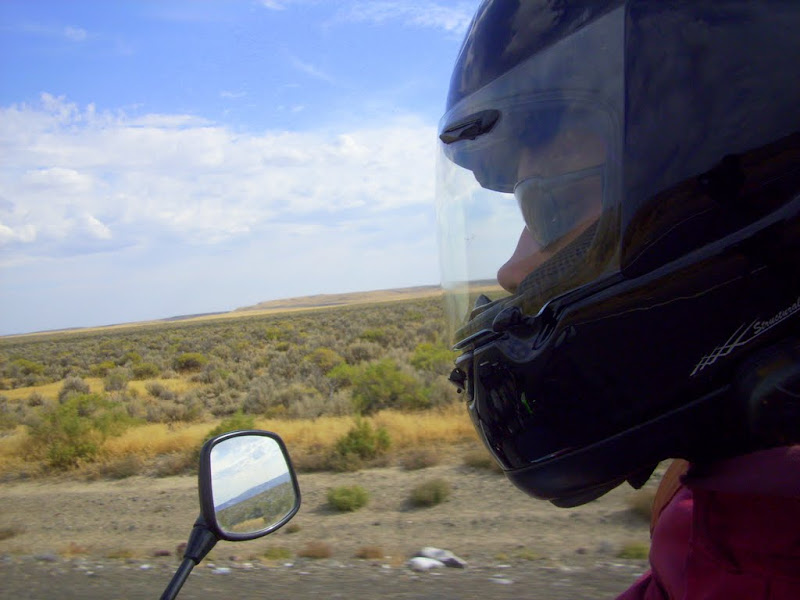 I approach the small town of Silver Lake and notice the Water Tower sticking high above the town.

(seen to the right here in this picture) 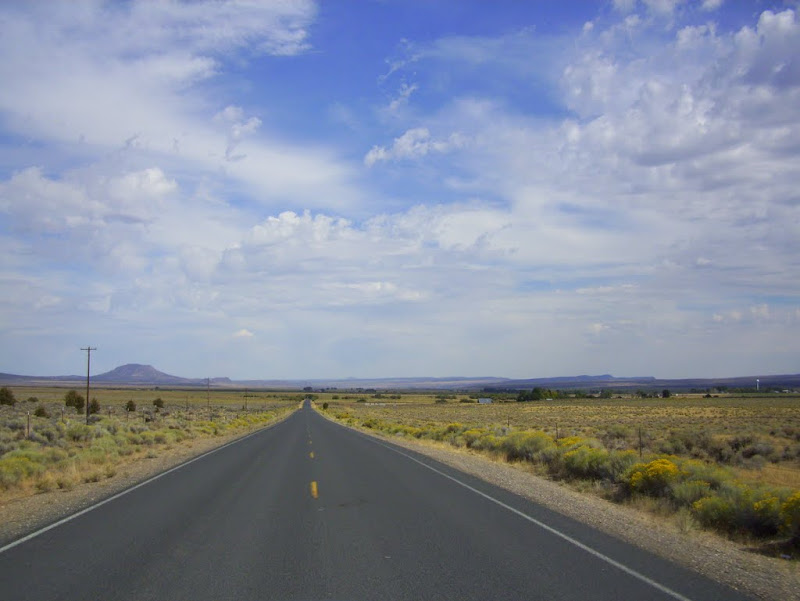 There may be gas here…fingers crossed I roll in to town and spy a single pump service station 247 miles into my 5.8gal tank.

I fill up, have a Snickers and plug in “Helena, MT” to the GPS unit then set out east across the Great Basin. In Christmas, OR, I run into a group of ADVRider folks on BMWs riding a mostly dirt route through this high desert country. One snaps my photo before I depart with a friendly wave. I pass on the water from a blue handled well between the gas pumps. 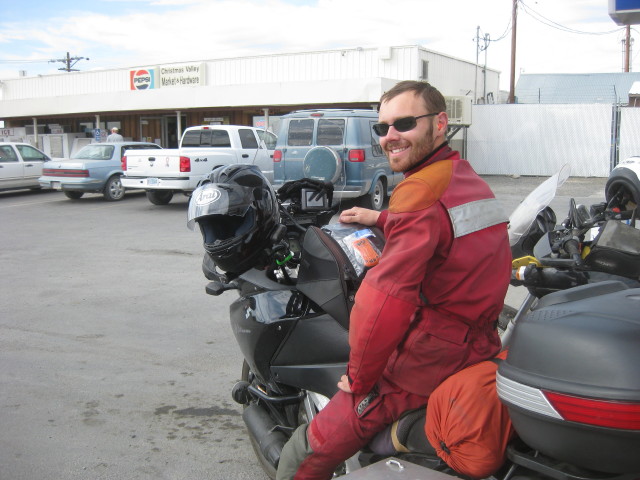 I crest its easternmost limit before camping beside Hwy 2- in the dry grasses of an Oregon autumn.

Irrigation allows some lucky farmers to harvest grasses and hay. 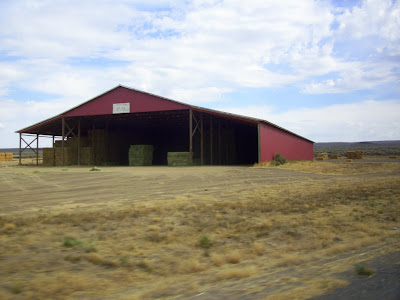 Biggest haystack I have ever seen! 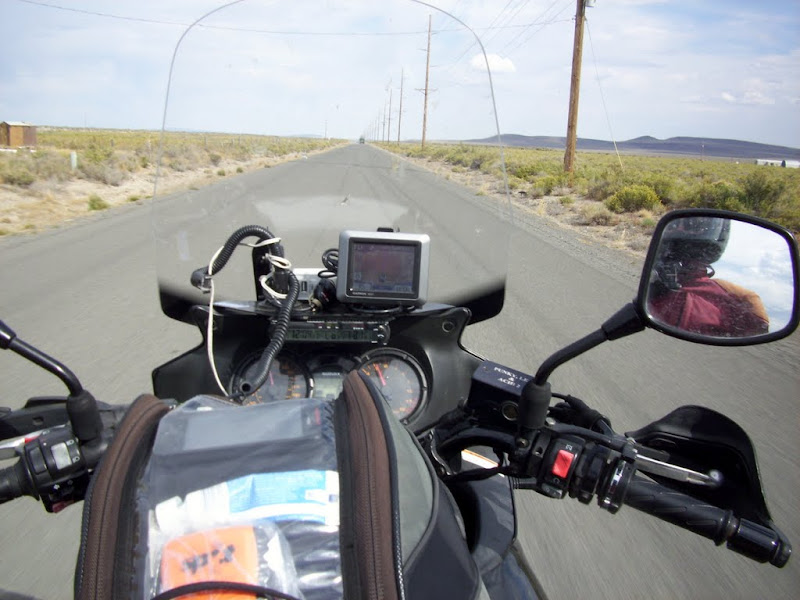 A few b&w shots of the area 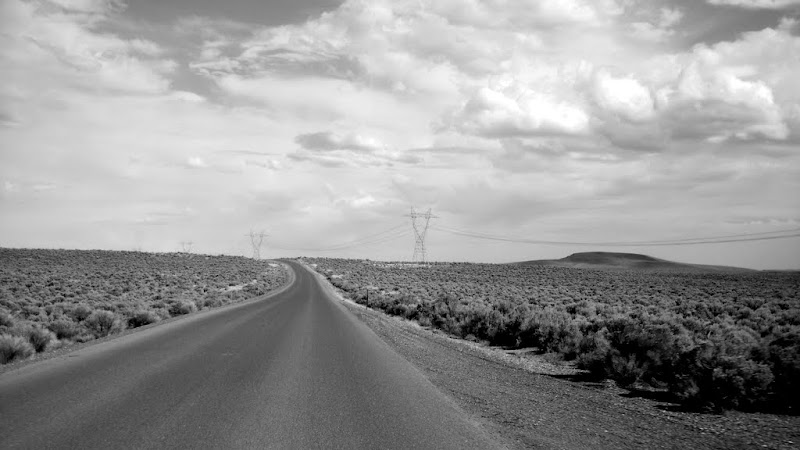 The tribes we killed. 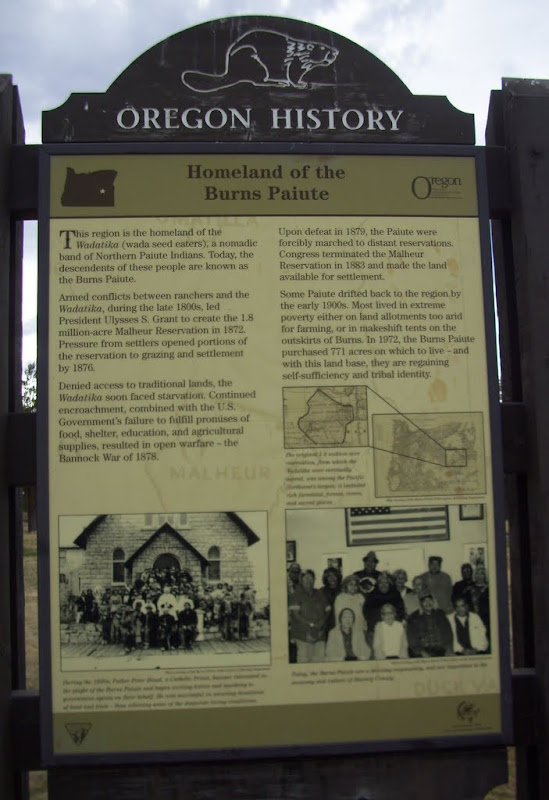 Just before setting up camp, I stop to mark the end of the Great Basin. 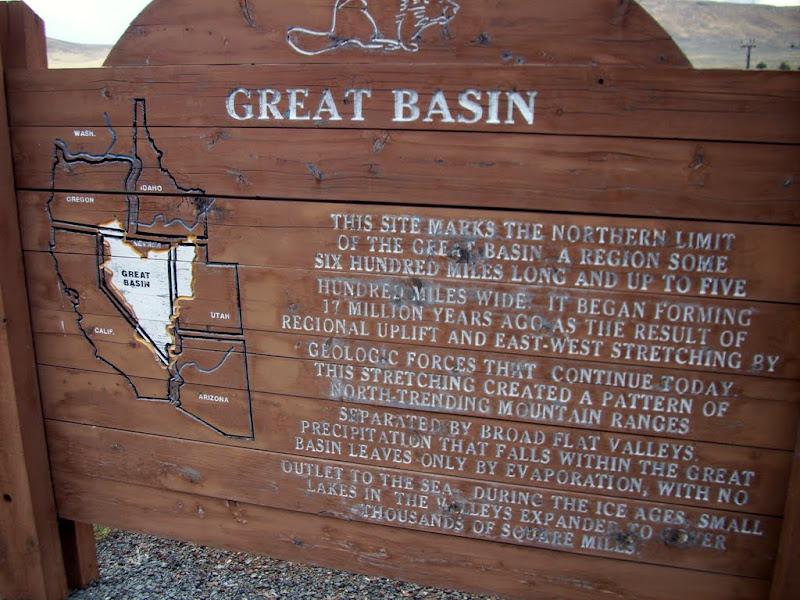 I better find a camping spot. The sun is fading fast. 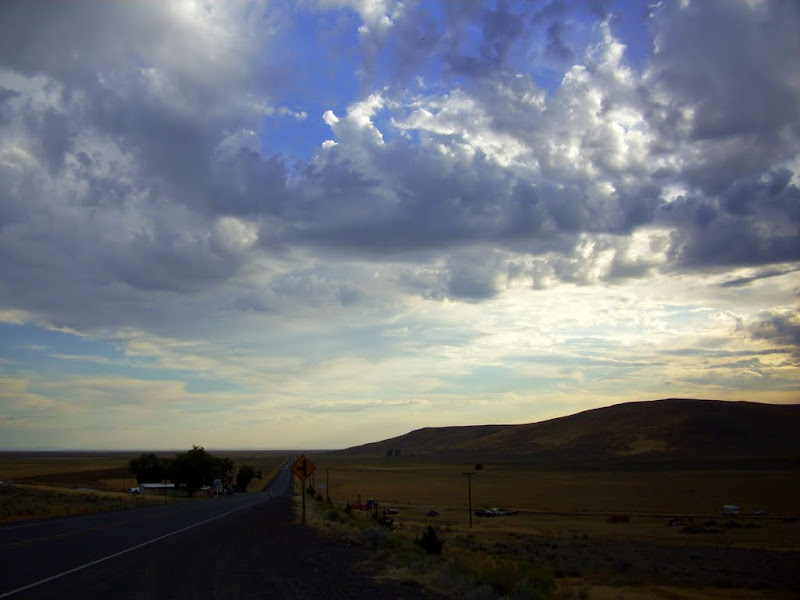 The parched soil beneath my tires spreads and cracks as I attempt to put down the kickstand in the sandy surface, eventually settling on a promising clump of grass. 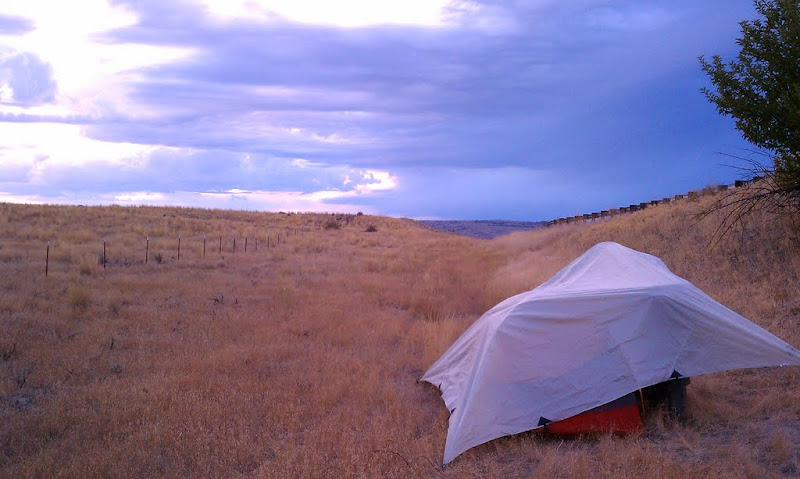 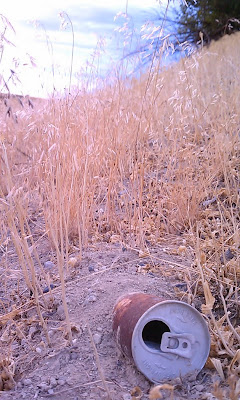 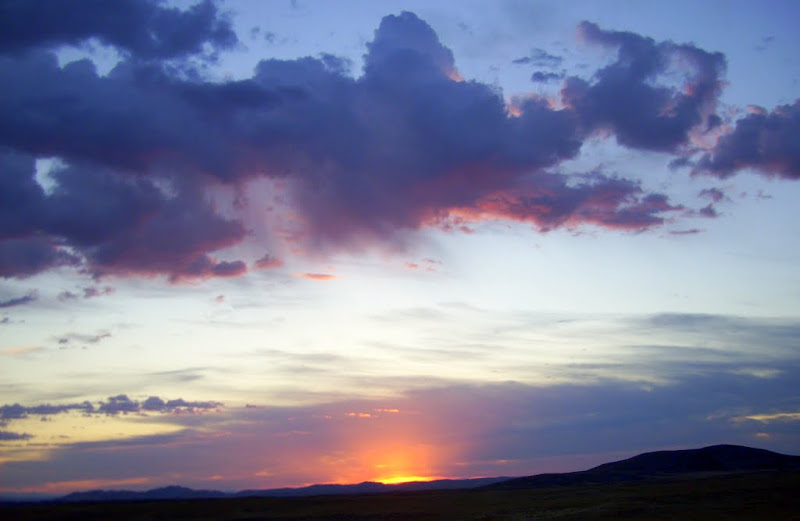 I make coffee, eat a chocolate granola and snickers then get in my tent, camouflaged beside the bike, both under a sand gray rain fly blending with the tan grasses. 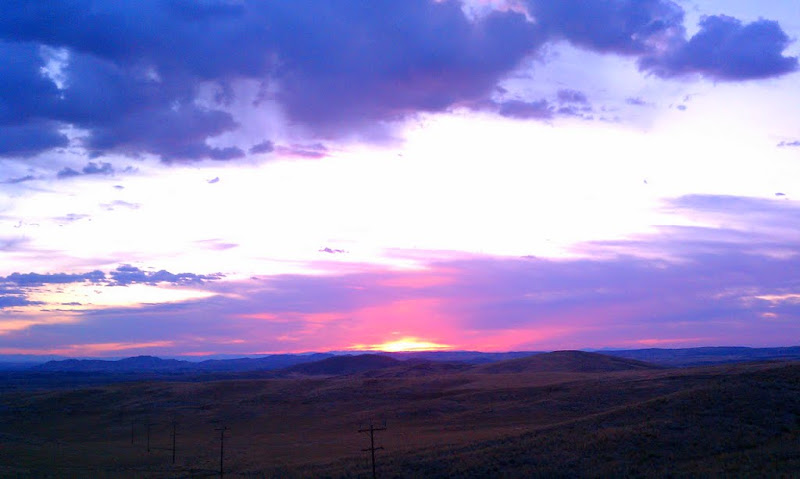 A day of relaxation, laundry, oil changes and family in Helena is mighty attractive after tomorrows 500mi push east.