I went to visit family near the Lehigh River in Central Pennsylvania this weekend. These are the pics and stories from Saturday and Sunday.

My first stop on the trip was Bob's BMW in Jessup, MD for a new speedometer cable. After some busted knuckles and greasy fingers in the parking lot, I was all hooked up and ready to ride. I rolled out of Bob's around 10:15 and took the highway up to 695 to 83N. After escaping the Baltimore region, I turned off on some side roads which eventually put me on the Baltimore Pike headed for Harrisburg. This road brought me across the Mason Dixon line and shortly thereafter to the city of Hanover.

The remainder of the trip to Harrisburg was your run of the mill PA farming communities and traffic was keeping me at 45mph so I was frustrated and took no photos. After passing through Harrisburg and moving up the river, I started to relax and turned toward Clark's Valley Rd to see some colors. 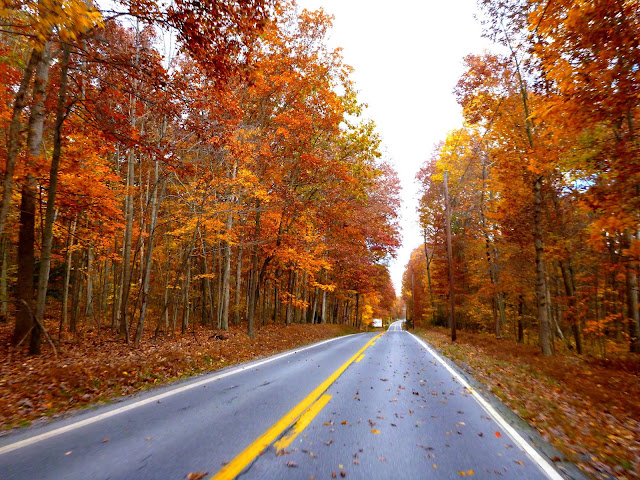 My friend who sold me the Stella is from Clark's Valley and recommended I ride through.

I stopped for some water and a granola bar alongside the country valley road. The wind picked up and ALL the leaves began to fall from then grand oak trees. 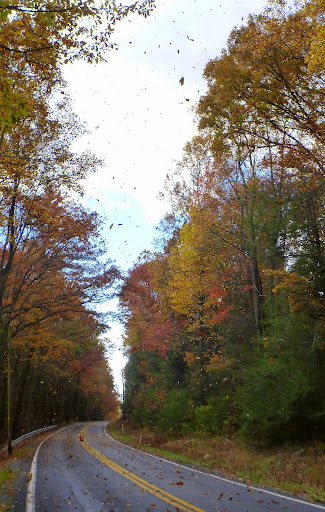 Continuing down the road, the colors were beautiful.

There is an awesome road here called Gold Mine Rd that twists up the mountain and back down a few other valleys and mountains headed South. I rode it to the top, turned around and came back. I made it a point to ride it again later.

View on my return down Gold Mine Rd.

View of Peter's Mountain from the roadside. It was hard to capture with a photo what you see moving through the trees.

On my way to Centralia.

This church looked so picturesque nestled in the bright fall colors.

Approaching Centralia, I couldn't tell there was anything of a town here. The highway then made an unusual bend and continued uphill. Once up the hill, I realized that this was a new section of road and the original Hwy 61 was above me and to my left. I turned around and made it back to the tank trap and closed highway portion. I rode over the low mound and was now on the old Hwy 61.

Here you can see evidence of the underground processes at work causing the highway to buckle and break in many locations.

I chatted with the locals on ATV's sitting in the crevice. The suggested I go ride behind the cemetery to see some more smoke burning from beneath the ground. 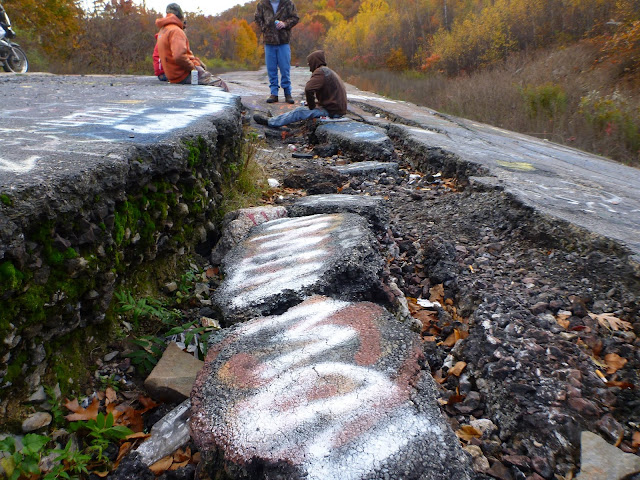 View behind the cemetery

The ridge to the North of town is dotted with wind turbines.

What appears to be an old Church sits lonely in the distance.

These boots were made for walkin'

I've been to many abandoned towns this year and have seen a number of shoes at each of them. Still trying to figure that one out.

Here are some of the only houses left in Centralia

I think I read that these two houses were joined and supported each other.

I set out for my cousin's house near the Lehigh River about an hour away.

Coming down this mountain the view NE was expansive.
v

A fall festival in Jim Thorpe and another in Lehighton assured that traffic would be miserable. It was. I took time to snap shots of the roadside.

This went on for miles trying to get into town.

I made a shortcut :evil

We made a fire and cooked up some Portabello Mushroom sliders on it with asparagus as a side.

Washed it down with a 1363 Franziskaner Weissbier :freaky

The following morning we had eggs and coffee for breakfast. It hit the spot. My family went on to church for the Sunday and I chose to explore and go riding. The scenery was beautiful in the crisp morning air. Nearly every church parking lot was filled.

These Canada Geese have the right idea heading South for the winter. I should take a queue from them and quit riding North every weekend!

I'm a big fan of Roadside America's App and found a number of neat locations on my route for the day. First up is America's oldest operational Drive In, in operation since 1934.

This old bridge and mill warranted a phot break.

Second up for the day is a grain silo converted to a lighthouse...in the middle of the countryside :huh

And continuing with the seafaring theme: A peg-leg pirate

I happened across an antique store/old mill.

Any clue what this thing is/was?

Maybe something from a video game?

Then I came to a fork in the road.:lol3

Followed by a paddlewheel riverboat many miles from a waterway.

These Amish statues had the strangest raccoon eyes

I passed through Virginville without taking my pick. I'll save Intercourse for another trip:rofl

I rode over a few mountain passes to Pottsville, PA. Home of Yuengling.

I always spot this statue on the hill and decided to go see what it was. 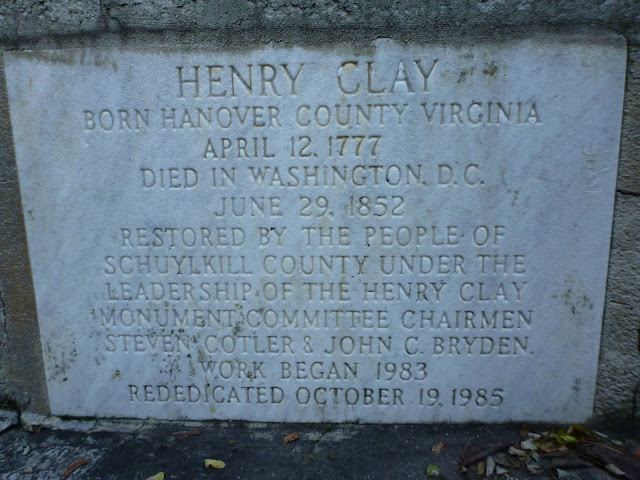 This strange Gargoyle Fountainin town outside the YWCA was used for thirsty horses.

After leaving Pottsville, I spotted a sideroad called "Black Diamond Rd" That sounds challenging...no Bunny Slope. It wound it's way up to a coalfield.

These coal seams were dug 20 feet down or more.

I continued following the GPS on a "Road" until we reached the railroad tracks. It was clear that the blockage below was not going to allow the GS to pass. You can see a small portion of the rocks which comprised this road. It was technical but nowhere near as hard as what was to come.

I made it back up the steep rocky slope and paused for some water and a banana. I had respect for this minature oak trying to make it's existence through the hard ground.

I looped back to Black Diamond Rd and saw that it came out in Newtown and was called Church St or Twp. Hwy 571. That sounds promising right?!

The road started to get worse

At one point I was on top of a steep hill with no way to turn around. There was a 2-3" tree blocking the trail and a rut to the left. I had only one option...to use the weight of the GS and the power of the 1150cc engine to break through the tree and hopefully not land on my arse. I made it through but dragged the tree in front of my rear wheel a few feet before it broke loose.

Then the road turned into this:

I was roughly following these hand drawn arrows on ATV paths that sort of mimicked the highway I was supposed to be on.

Taking a breather. This was a serious workout

This final portion of road up to Newtown was incredibly difficult and really tested my skills to the limit and beyond. Drops, ledges, ruts, basketball sized rocks, tree branches and mud. It was spectacular.

Just when I can see the Church on Church St. I come to this! :eek1:huh I could have used a sip of Whisky by this point :deal

I unloaded the GS. That's how I know things are about to get real serious.

This hill was the only option out. I could brave the 45% slope at 90 degree angle to the trail on the ATV path (to left of tree) or make my own route up beside this tree. I attempted this route but dug in the rear about halfway up the hill. IT took all my strength not to dump her there and then walk her back down the hill. Phew.

The hill above the bike to the left was one of the only exits. I ran up it a bunch of times. It was easily 10ft above the trail, nearly vertical and had roots at the top. Not ideal. Probably not possible without full on knobbies. Did I mention I had a full tank of fuel! :doh

I got crossed up in this deep rut where both the front and rear tires were in their own separate gullies. I just lowered her down to go figure out what to do and how to get out. 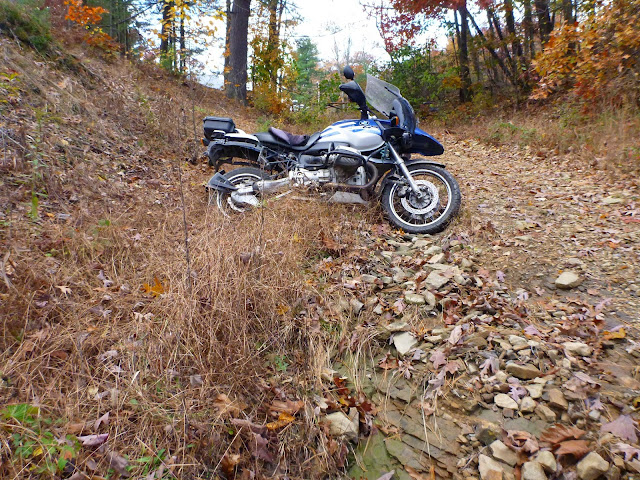 I wound up dragging the bike around on the crash bars. From here I was going to attempt the suicide hill when I heard a truck approach. I was dripping sweat and very weak but decided I'd go ask for help or advice. I spoke with the large man with thick PA mountain accent. He told me another ATV trail went off to the north but looped around behind the cemetery. If I could make it up there I may be free! Sorry I have no pics of this since I left my camera with my luggage (so as not to break it). I fell about 3 or 4 times trying to make it up an antrhacite coal hill with loose slag and boulders. Nearing the top, I could barely stand up. I fell overand just sat there next to the bike. Blood pumping through my ears, I needed a rest. Why did I leave my water back with the luggage. Breathe.

The next thing I see, there are three mid-twenties guys walking toward me, guns over their shoulder and beer in hand. "Hey guys! Mind giving me a hand?!"

"Sure! We've been hearing you making a racket out here for a while" They helped push me up while I rode out of the steep hill. This put me on to the coalfields paths which eventually guided me back around the cemetery. I gave them a wave and told em I'd give em any liquor I had if I had any! They couldn't believe I was there on such a big bike. They'd lived there their whole lives and had never seen anyone ride anything that big through there :thumb

and back on down the road with a huge sense of accomplishment. When in doubt, ask a local :deal It has saved me numerous times.

Tower Rd looked cool and went up to this rise but half the way up, it was illegal to pass. Damn.

Red Rock trail as the sun began to sink lower in the sky.

Tactical Vehicles? Where the hell am I?

I'm getting the feeling I shouldn't be here...

Confirmed. GPS had me routed down this road...

I had come from this direction but turned around to take the pic. :huh

Standard construction military buildings circa mid 40's. I've seen these from CA to Newfoundland to Georgia to PA

I set the GPS toward home and made it to Harrisburg with less than an hour to spare before sunset. Here is a bridge over toward the state capital. It looks like it could be in Europe

I decided to go check out this island in the middle of the Susquehanna River.

Took a break there and watched this train cross the river.

On the road again

Chasing my shadow down twolane roads at sunset is high on my list of favorite things.

Celebrated with a 8.5% Pumking beer with a friend at the beer garden. Well deserved after this day!