Day 3: Brent, ON to Nipissing River Portage at Nadine Lake

The rain stopped around midnight and the night was wet and cool. I woke early, began packing the wet gear and ambled down to Windigo Lake for a picture of the sunrise. 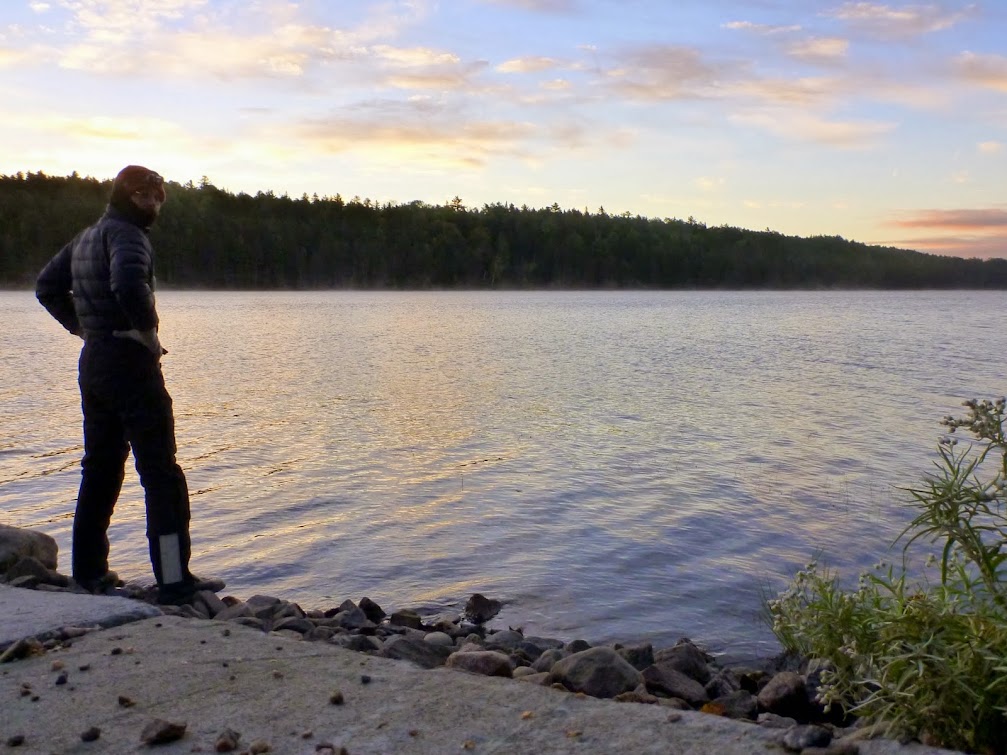 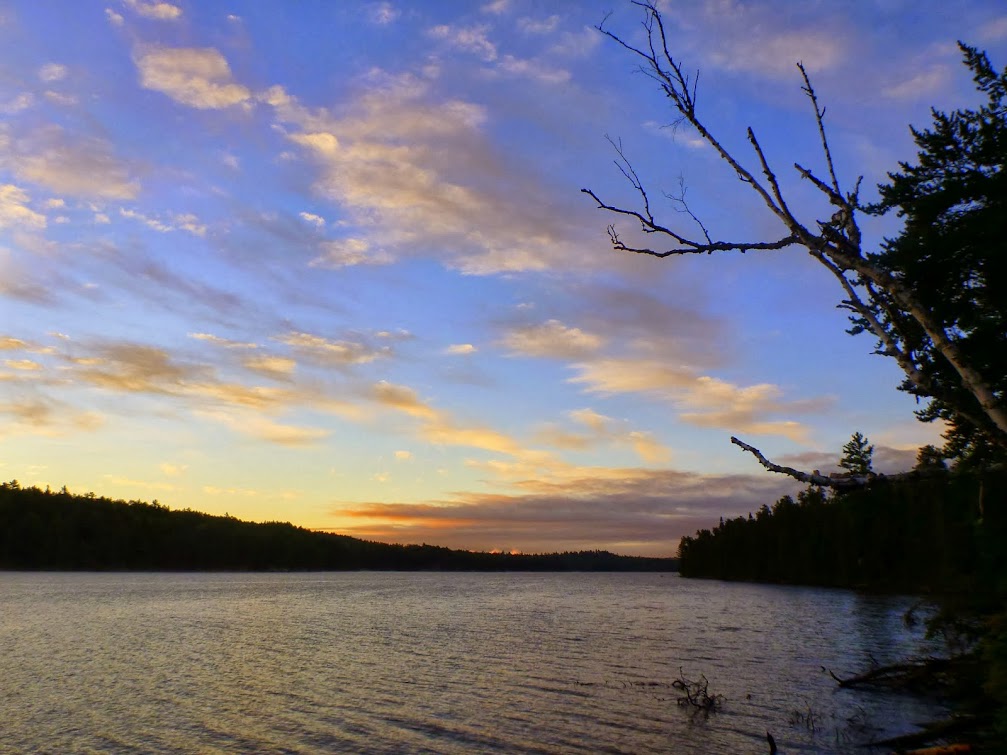 Matt packed up too and we were shortly on the Brent Road headed south. 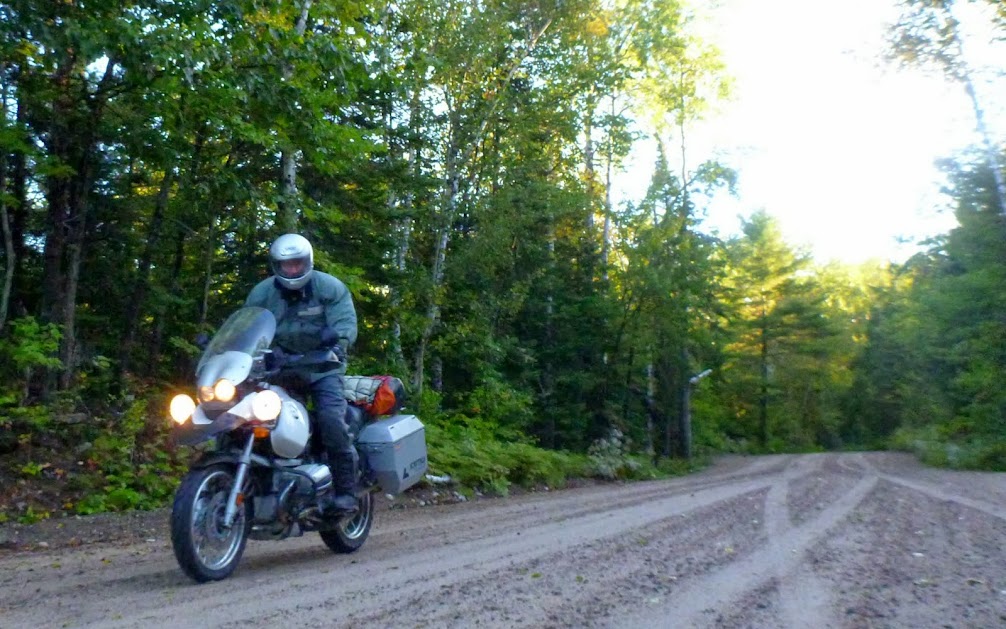 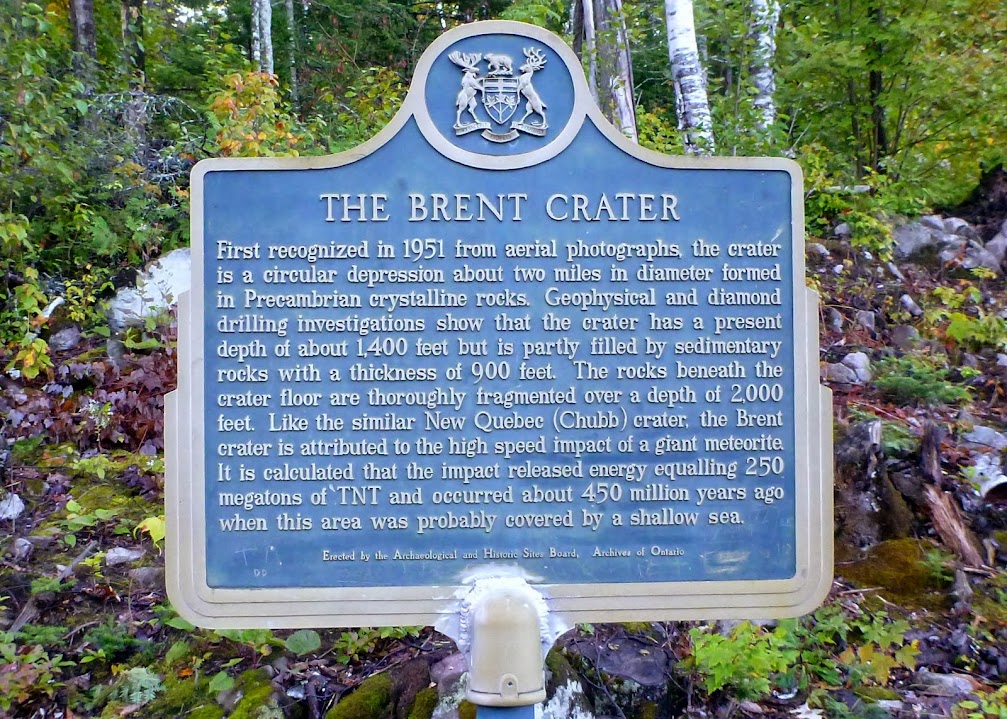 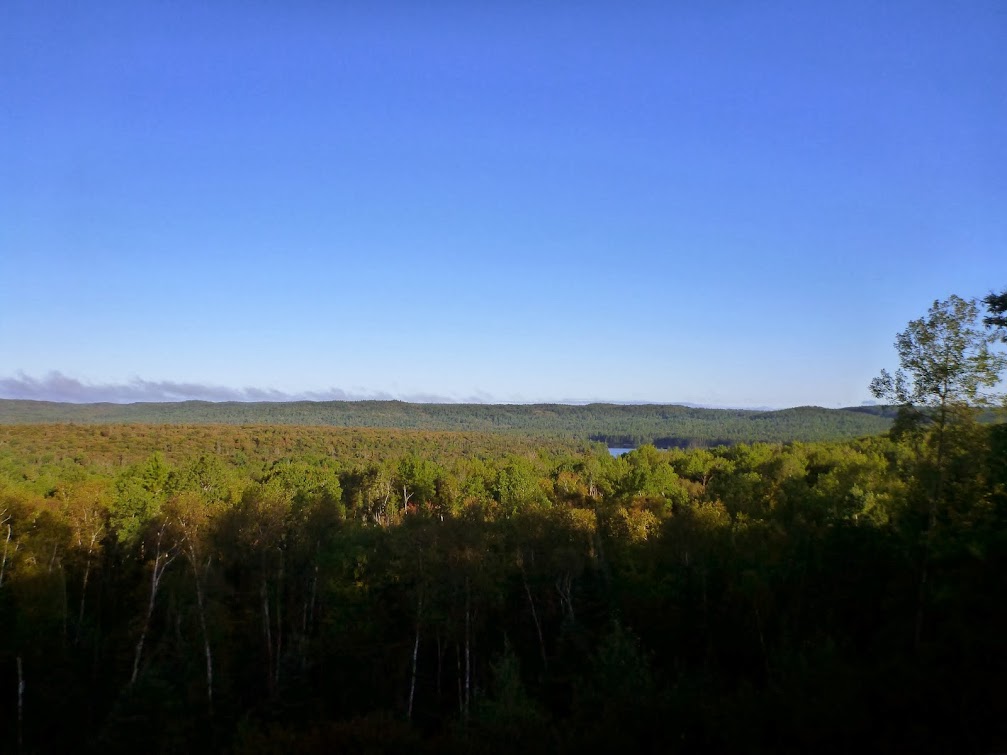 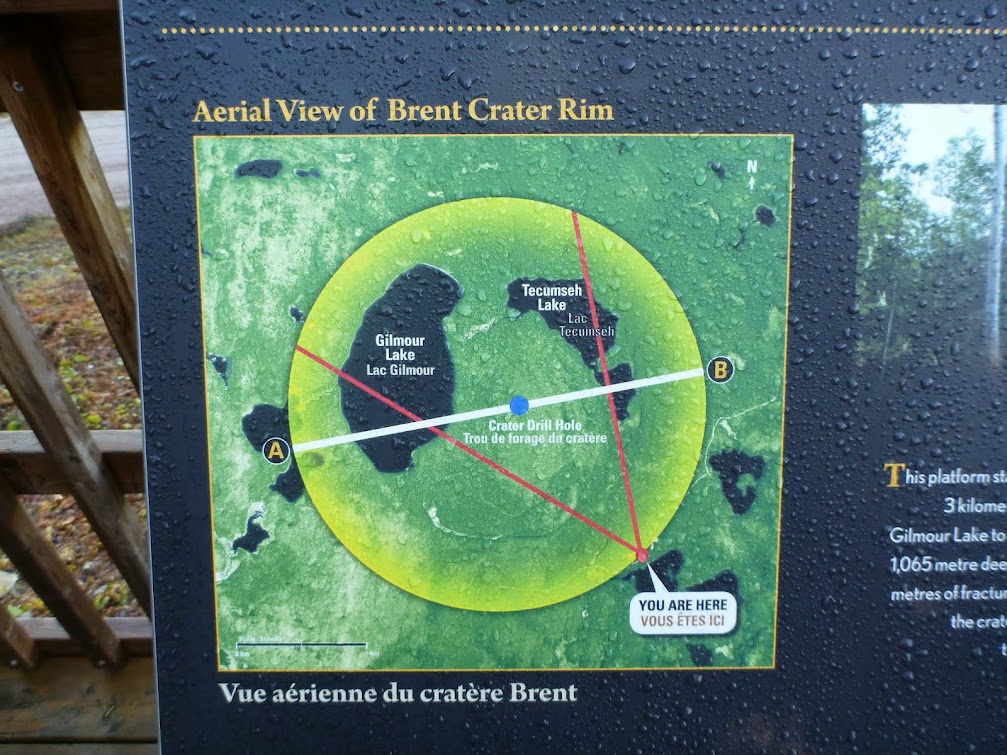 The road was a bit sloppy in spots with the sand and mud but nobody fell over. 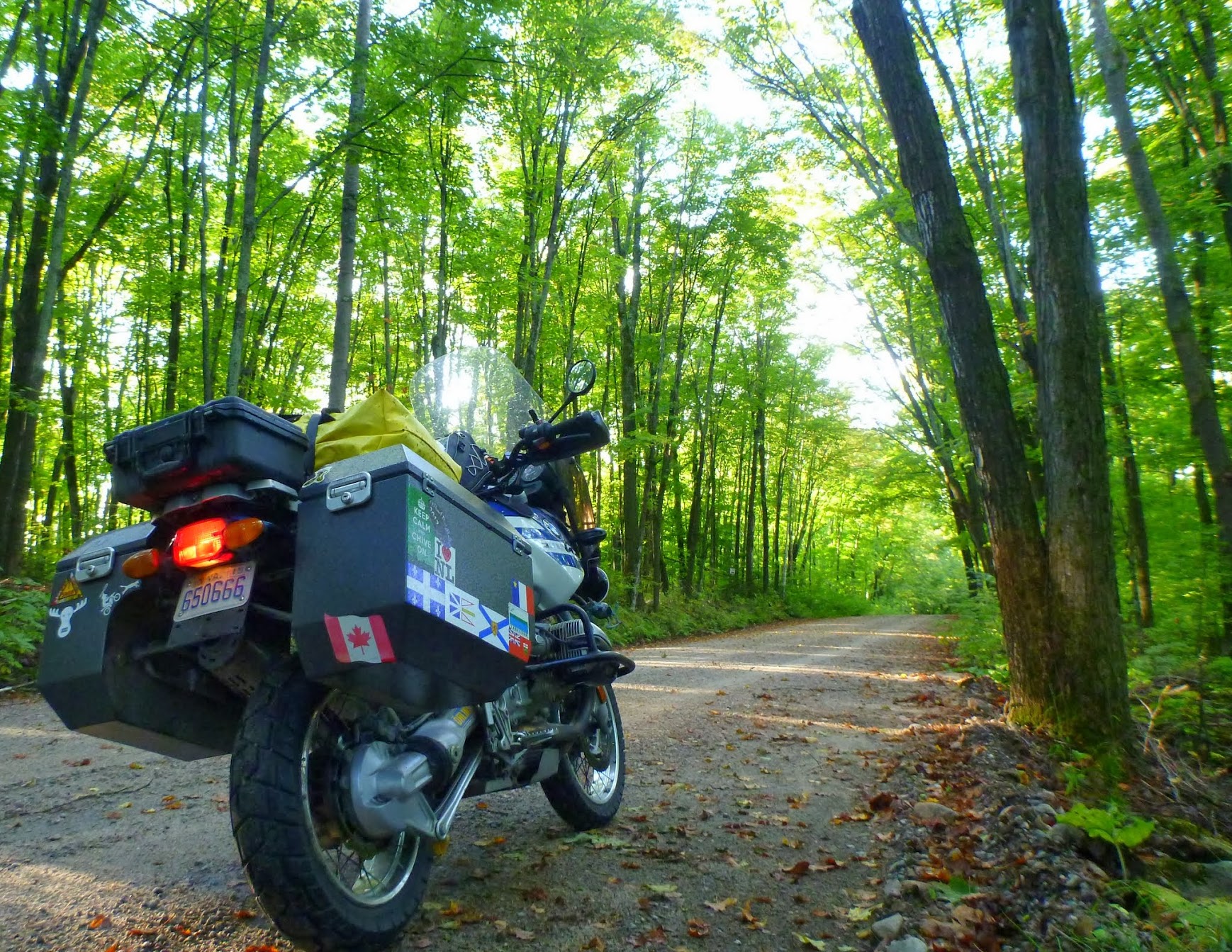 We made it to brent around 9:00 and began unloading gear and stowing motorcycle related gear. Jake, the crusty old sage who runs the Brent Store and Algonquin Outfitters post there had two lively boxers who were interested in our gear. While inside checking on things, I look out the window to see one of them taking a big yellow piss all over my backpack and PFD! I run out yelling but the dog doesn't stop. It just shakes it off and ambles away. I have a big laugh and Beard agrees this is a sign of good luck! 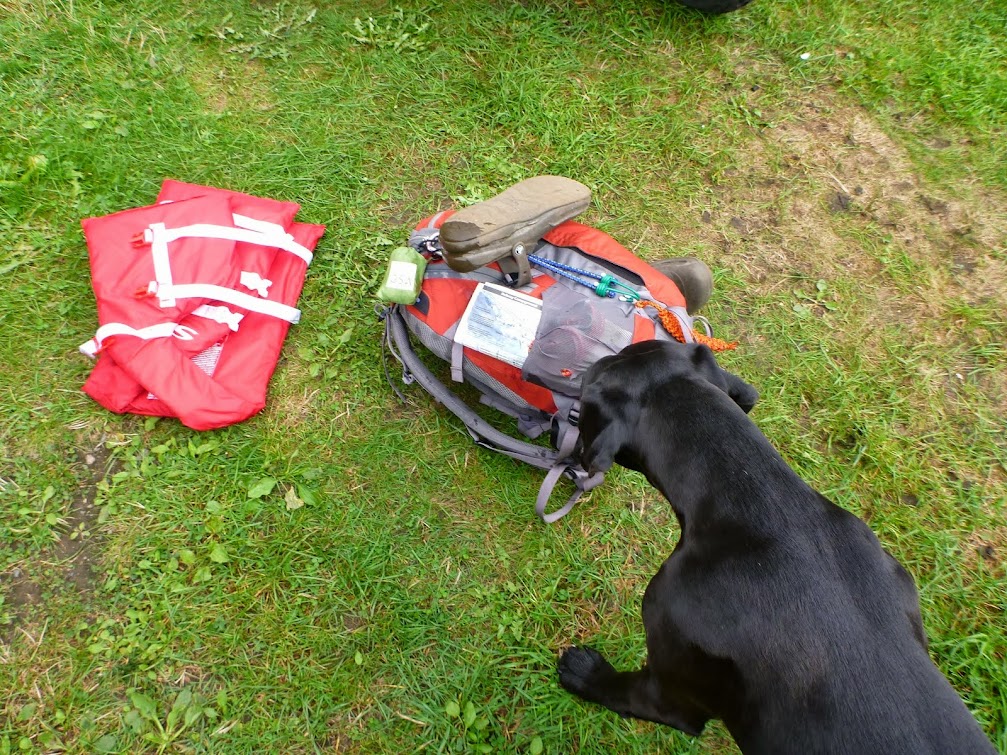 Loading the canoe took some time (1hr) as we made coffee and oatmeal. As we set off, a couple came down to the dock to survey the choppy water. We shoved off across the lake with a tail wind strong enough to push us around. We got a bit lost in the weeds in Marshy Bay and had our first 1M portage as the sky decided to spit on us. Our first real portage of the day was 1km, mostly uphill past the rapids where Matt carried the canoe. 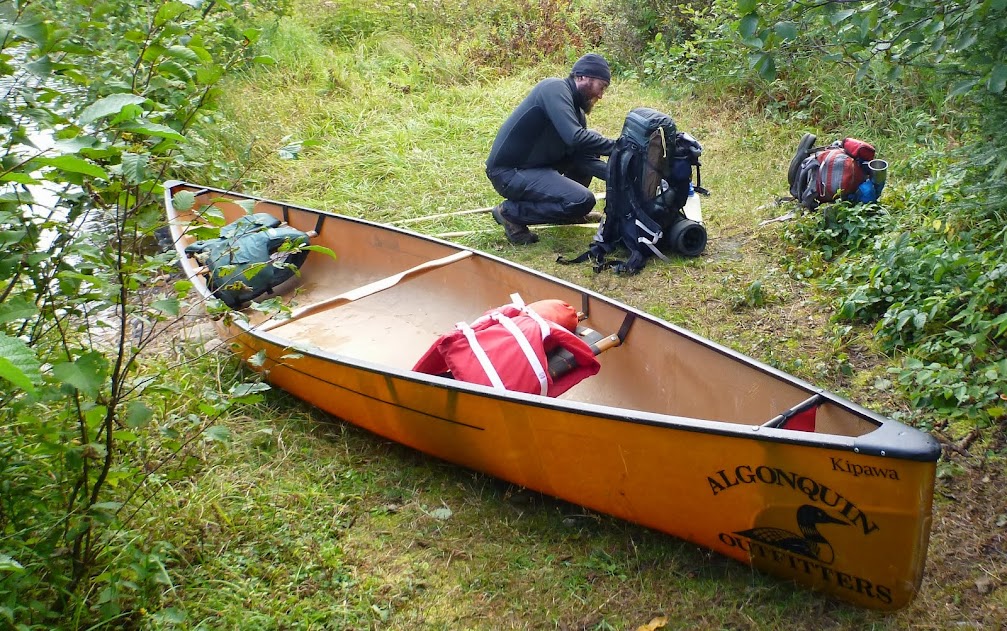 I had a snack. 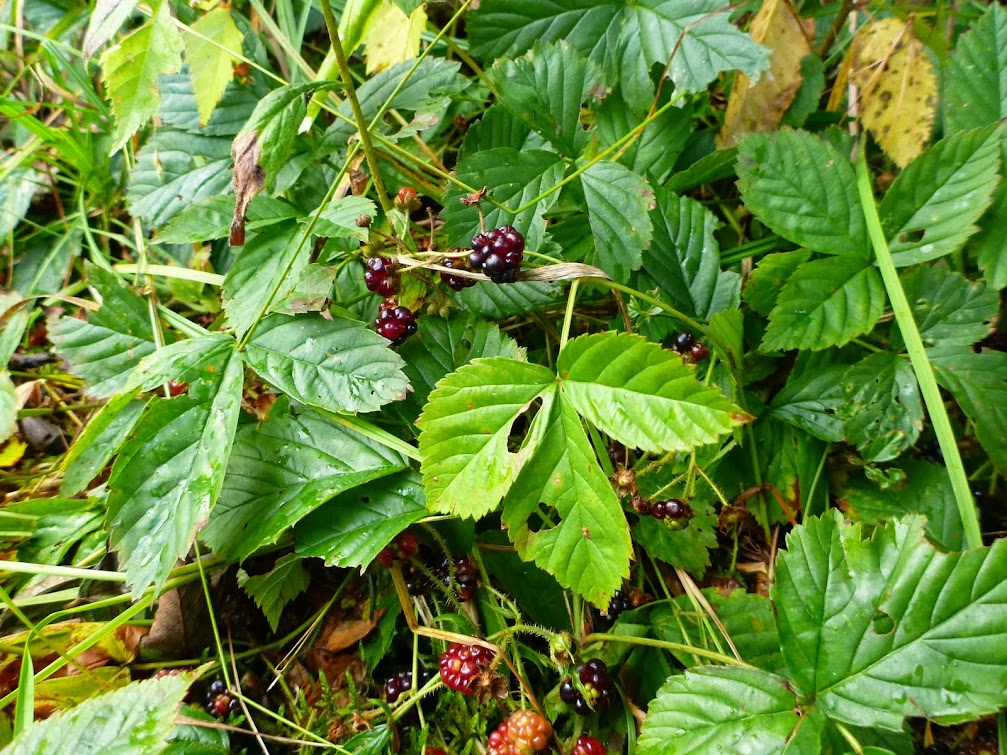 We returned down the trail to take some pictures of the rapids and in doing so, Matt lost the lens cap to his camera. He looked for it but wrote it off as lost. 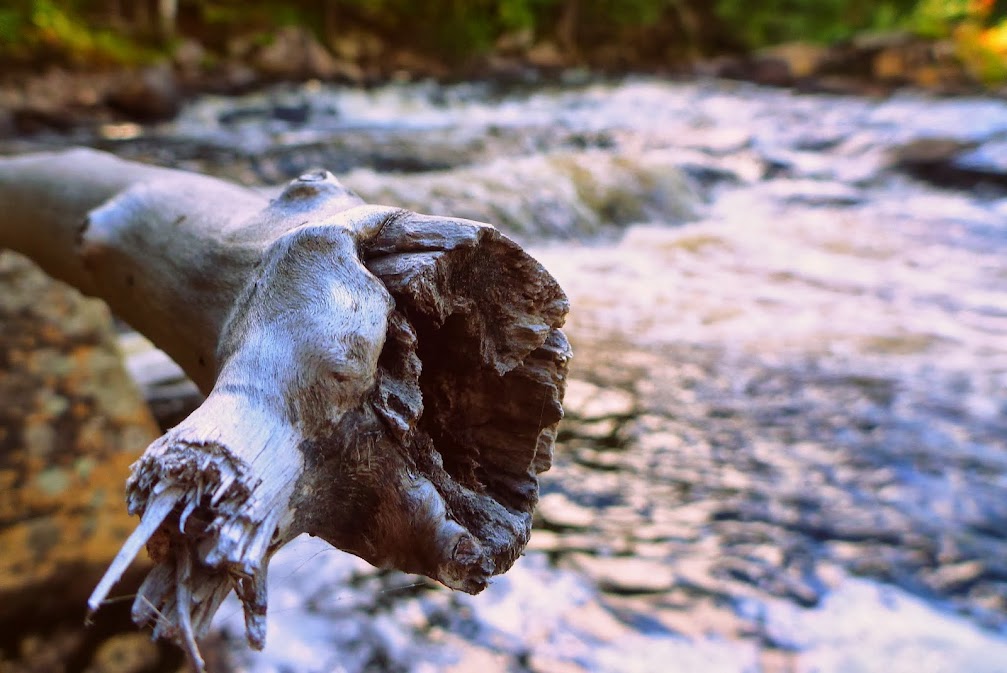 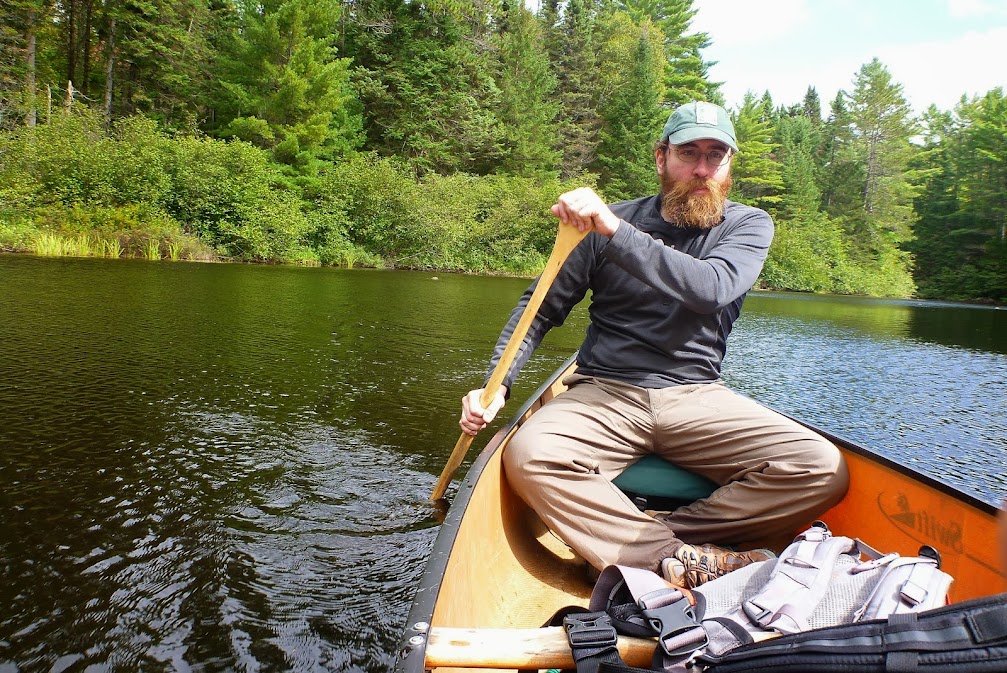 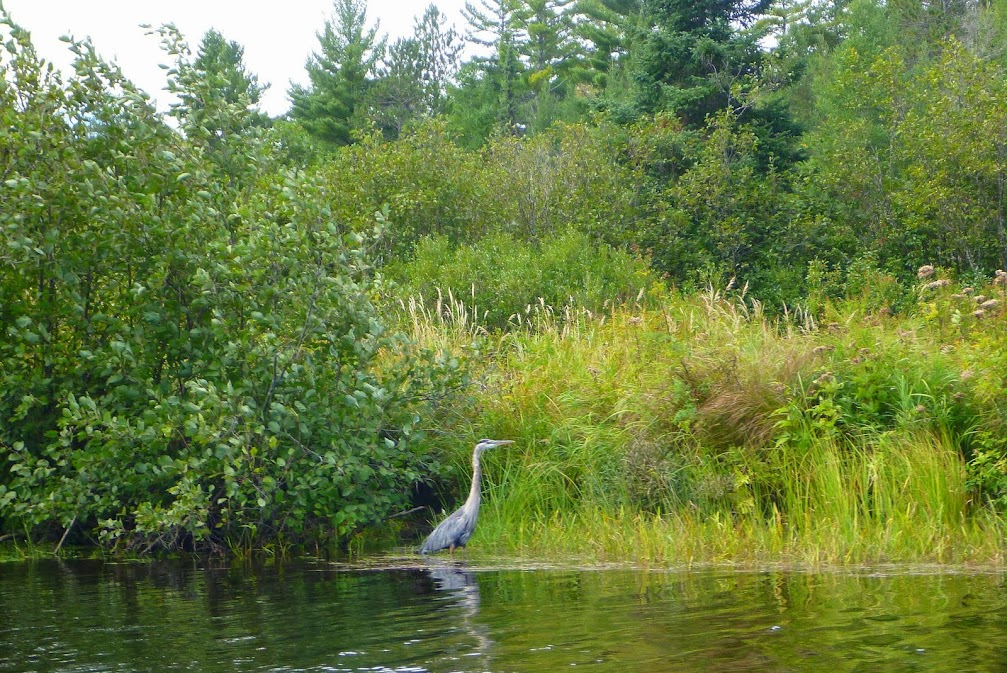 We paddled a ways to the next portage where, for the first time, I carried a canoe on my shoulders over land. 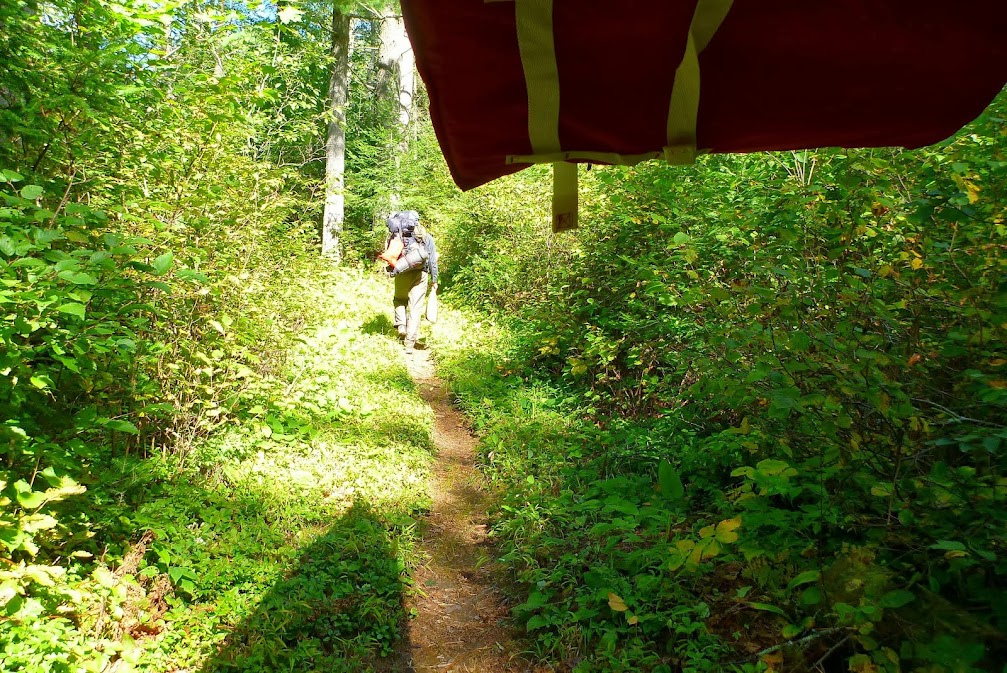 The yoke dug into my thin shoulders and I lost traction toward the end and fell on a muddy bank. My right hand dropped to brace my fall and the canoe fell directly on top it, sandwiching it between the gunwale and the only rock in immediate vicinity. I had a nice cut, sore and swelling hand. Tough shit. Don’t be stupid. 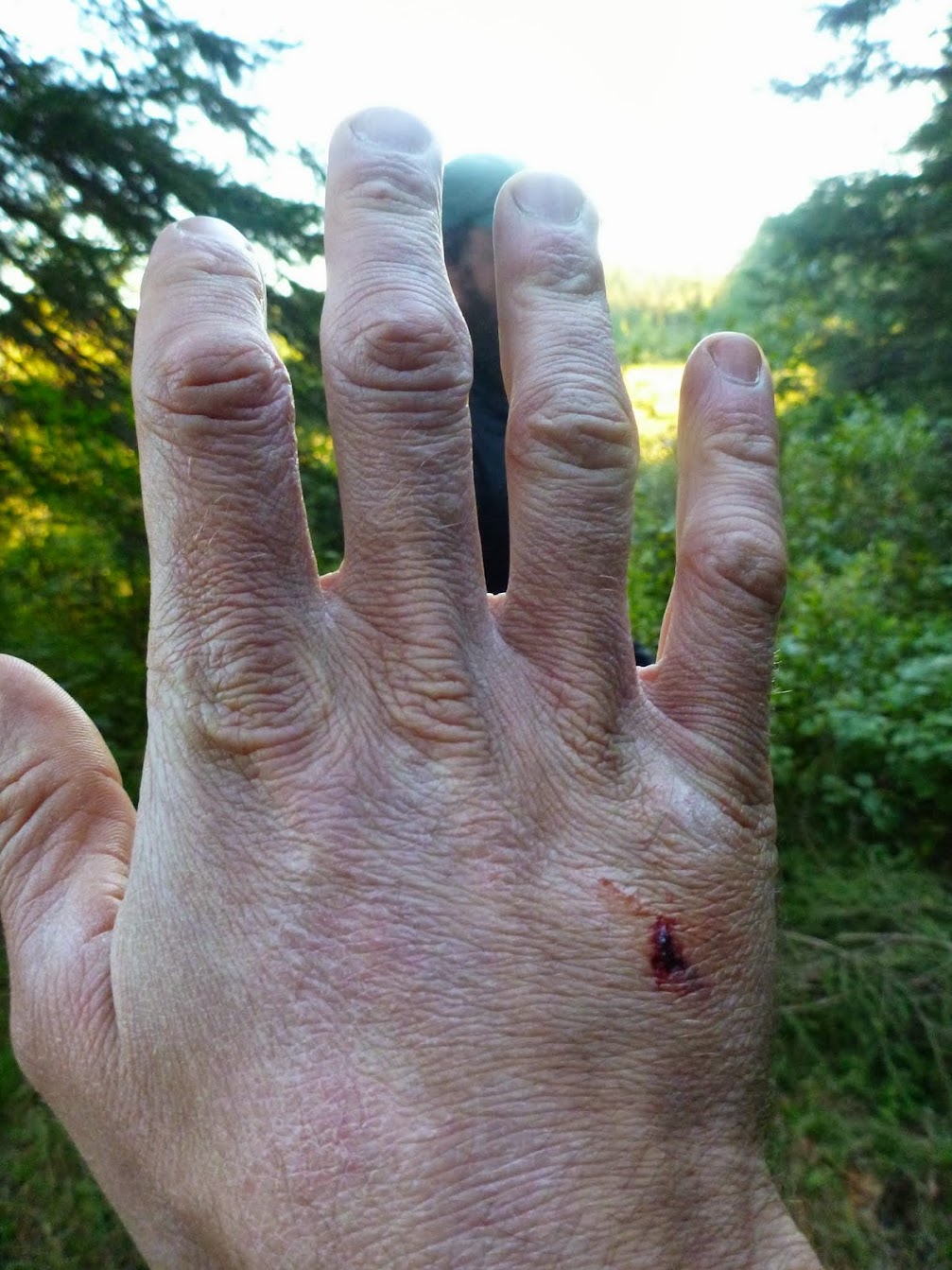 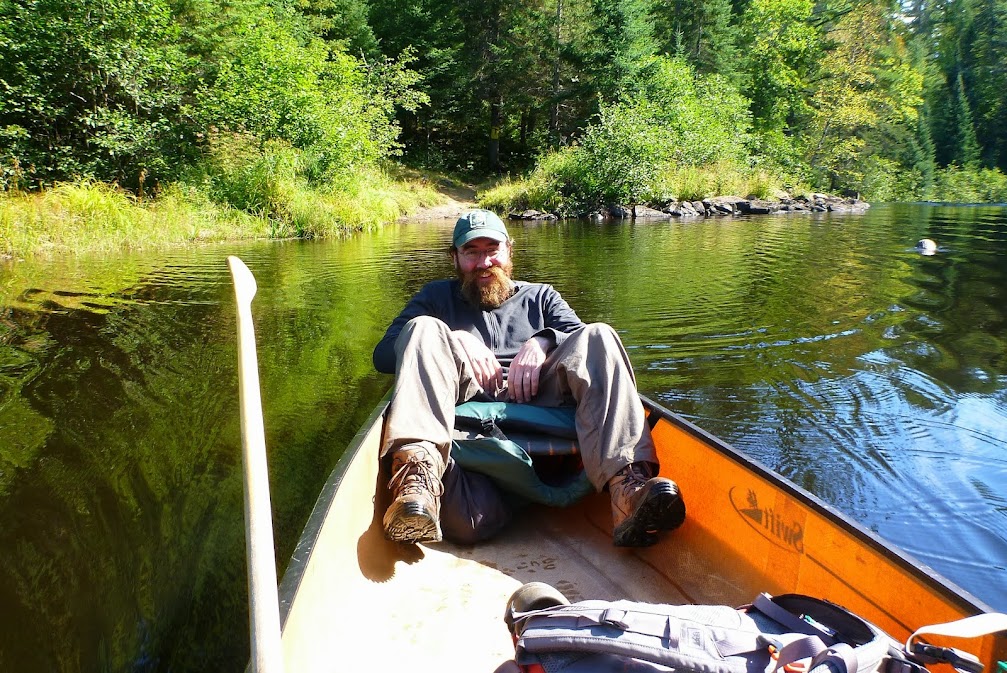 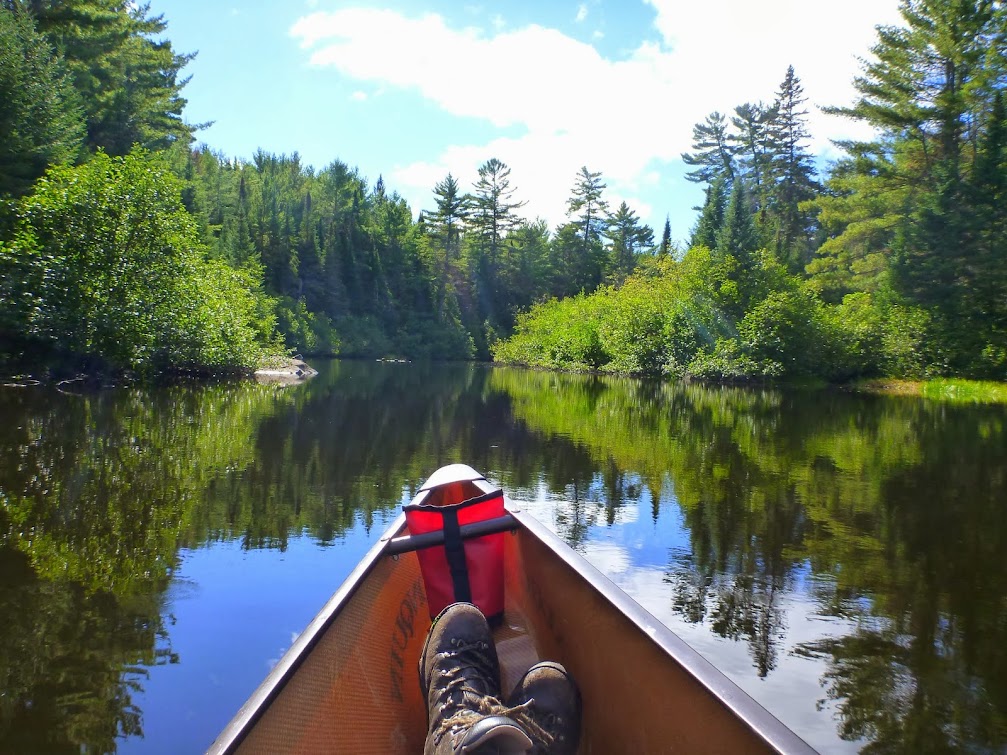 From here the remainder of the day was spent meandering up the Nipissing River approximately 20 km with some short portages thrown in for variety. WE observed beavers, otters, wood ducks, many fish, frogs and a curious and poor planning Great Blue Heron we dubbed “George” that preceded our canoe by 20 m for a half hour or so. 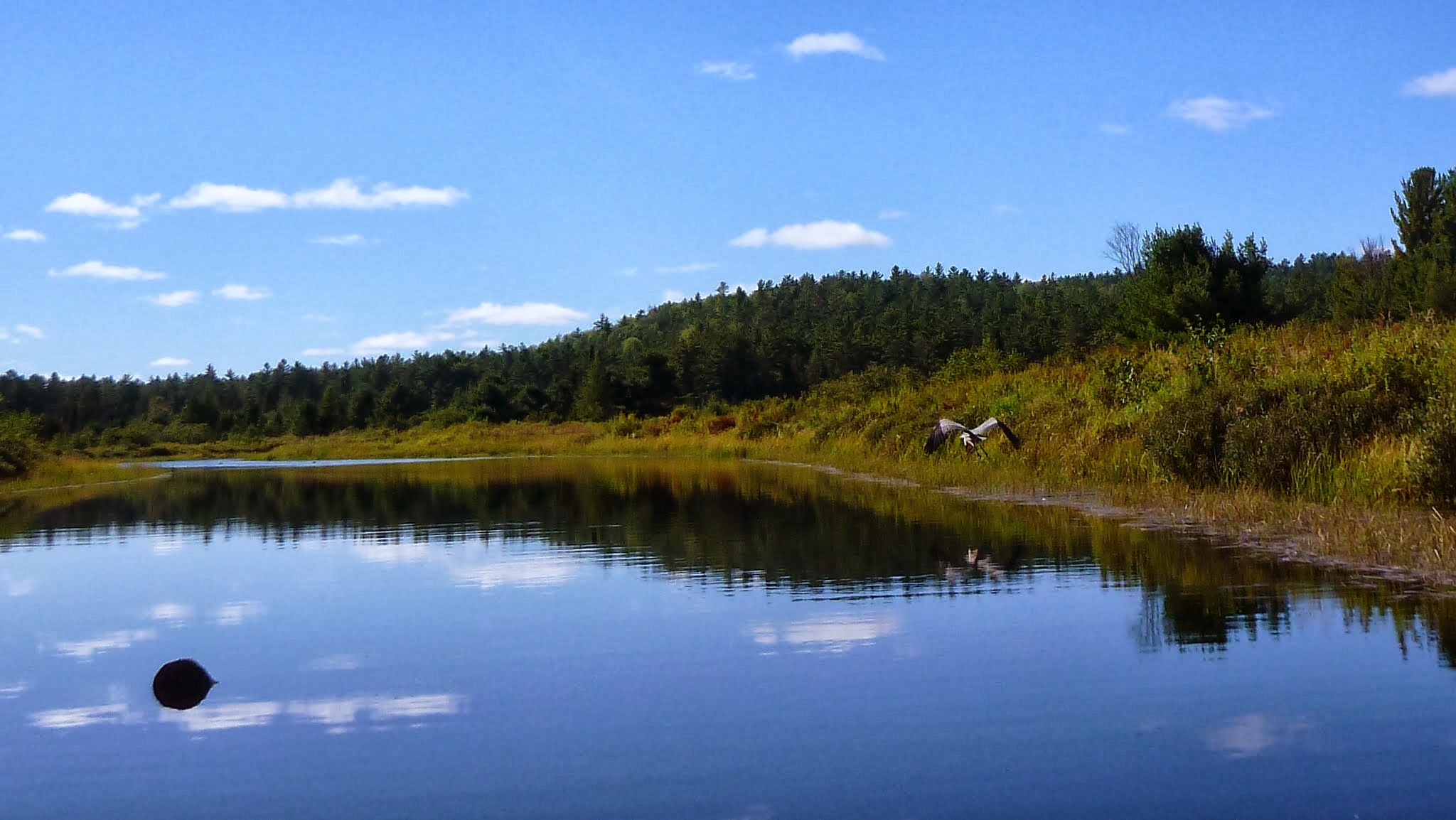 The evidence of moose entry, prints and cracked vegetation suggests we were very near or being watched as we labored upstream. A number of large beaver dams could be heard in the distance and grew louder with the rushing water and tell tale foam as we approached. 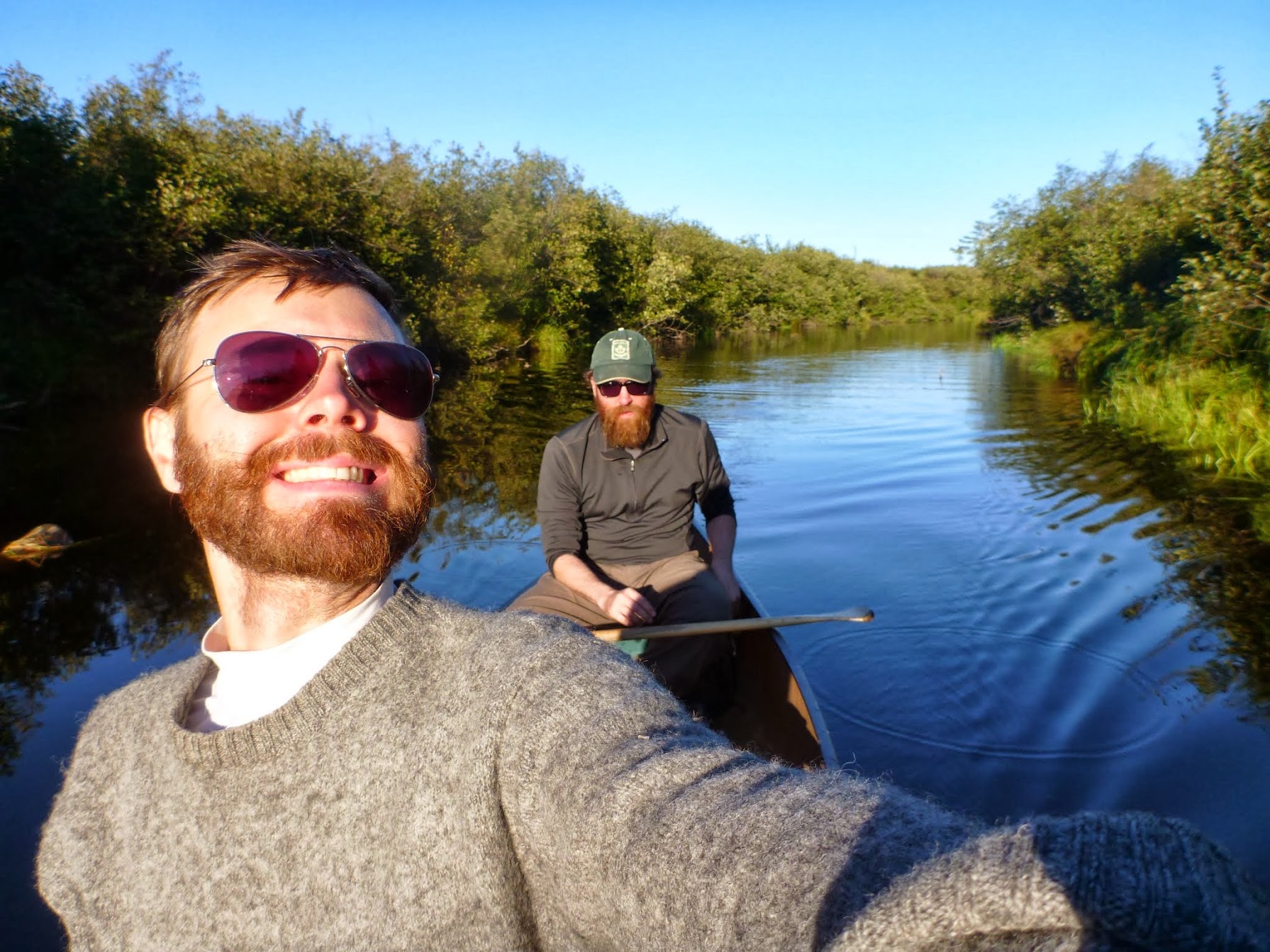 Some of the smaller ones across the river involved getting out and carrying the canoe over if unable to paddle through. The sun sank lower and we took bets on how much light would be left when we reached camp. Fortunately we arrived around 6:15 with an hour of light to spare. 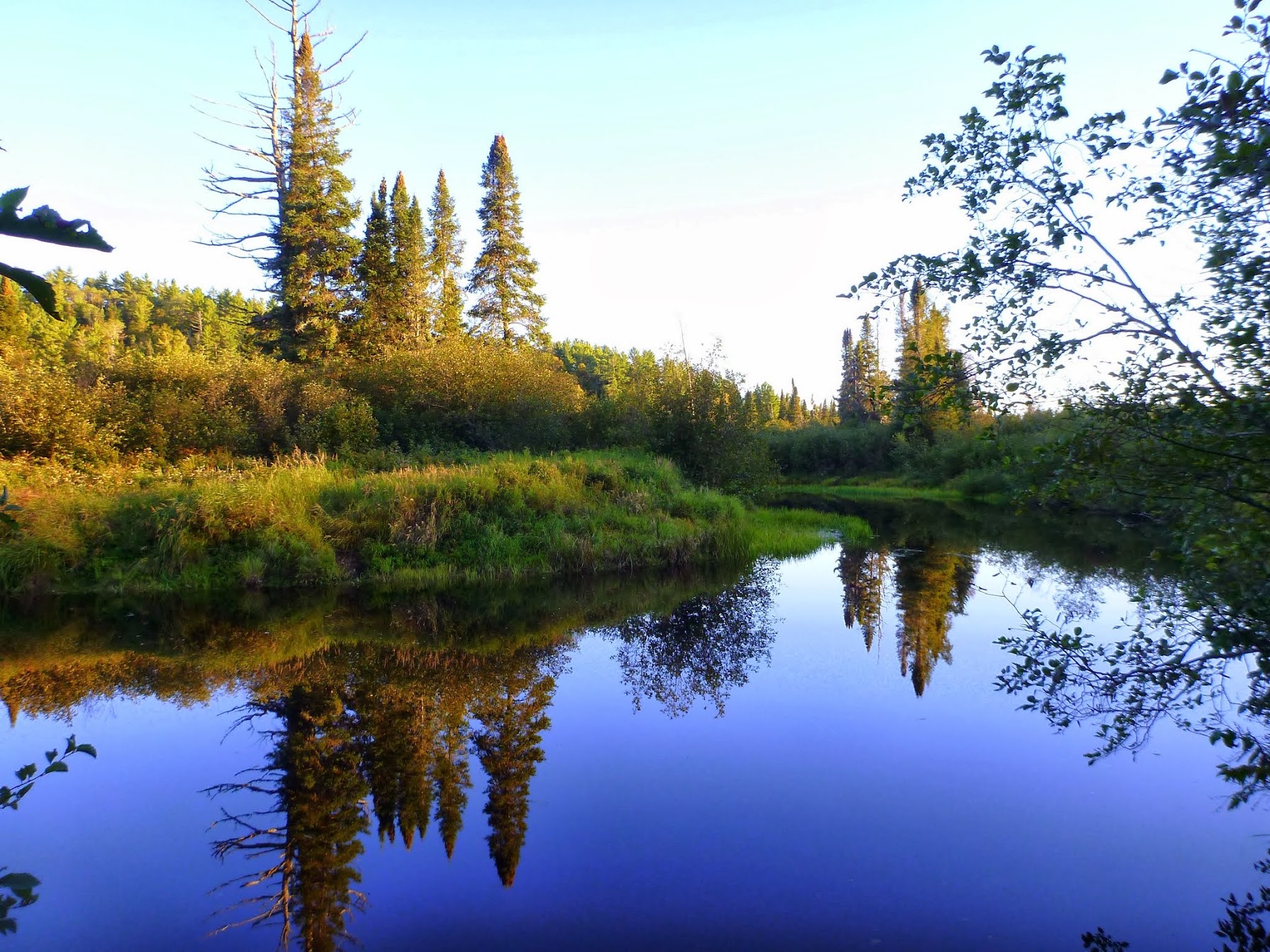 The “Spring” at camp was a shallow tepid basin at a tree which did not look safe so we boiled river water on the smoky fire. This, we later discovered, was our meal ticket to retirement as we plan to sell “Beard’s Artisanal Smoke on the Water” to hipsters nationwide. They’ll buy anything rustic, original and seemingly useless. On the search for the spring, Matt discovered a large moose leg bone and then, under a fallen trunk, the bleached remains of the young moose calf. 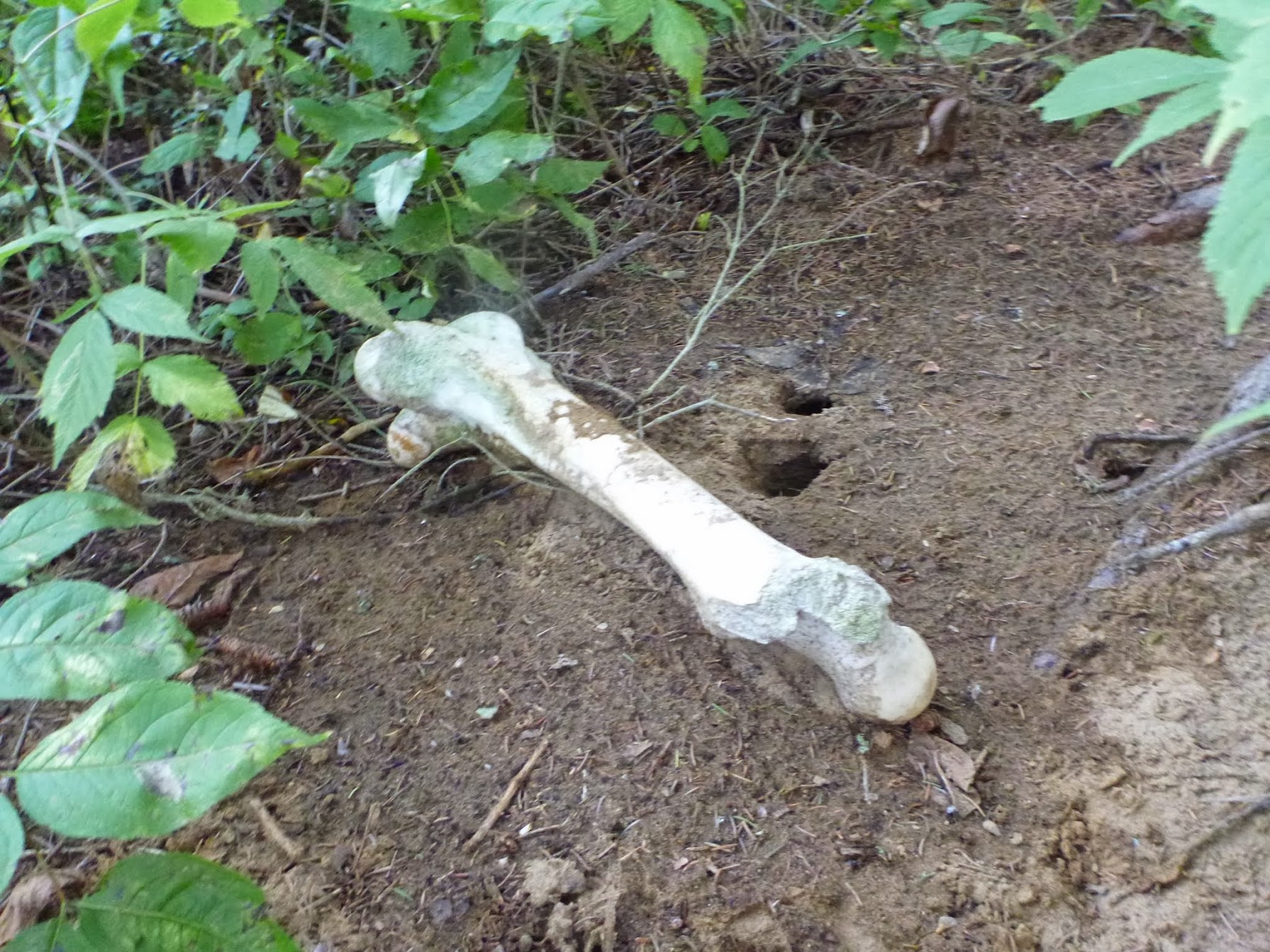 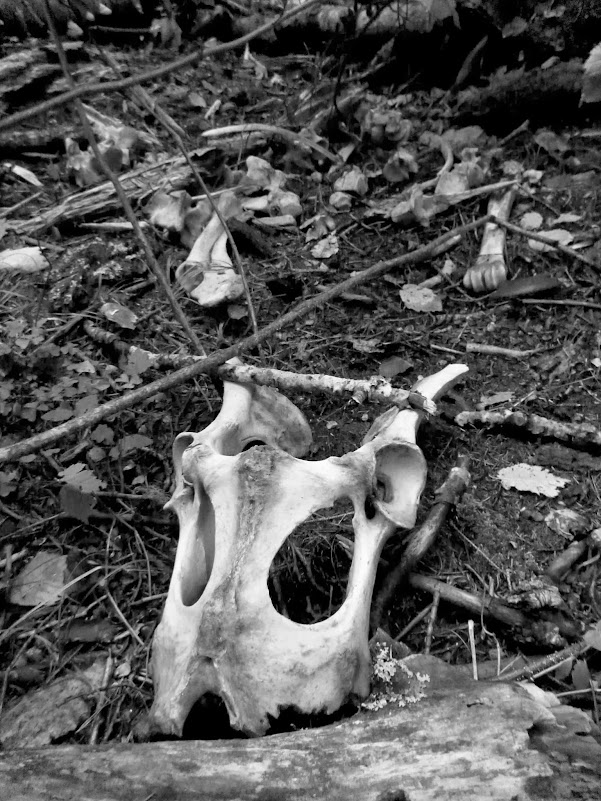 The night descended on our river bluff camp and a fog fell over the valley just in time for a moonrise. We cooked a well deserved dinner of Jamaican Jerk chicken w/ BBQ sauce (mine fortified with Tuna), washed down with our final two Old Chubb beers and too much whisky from our ration. 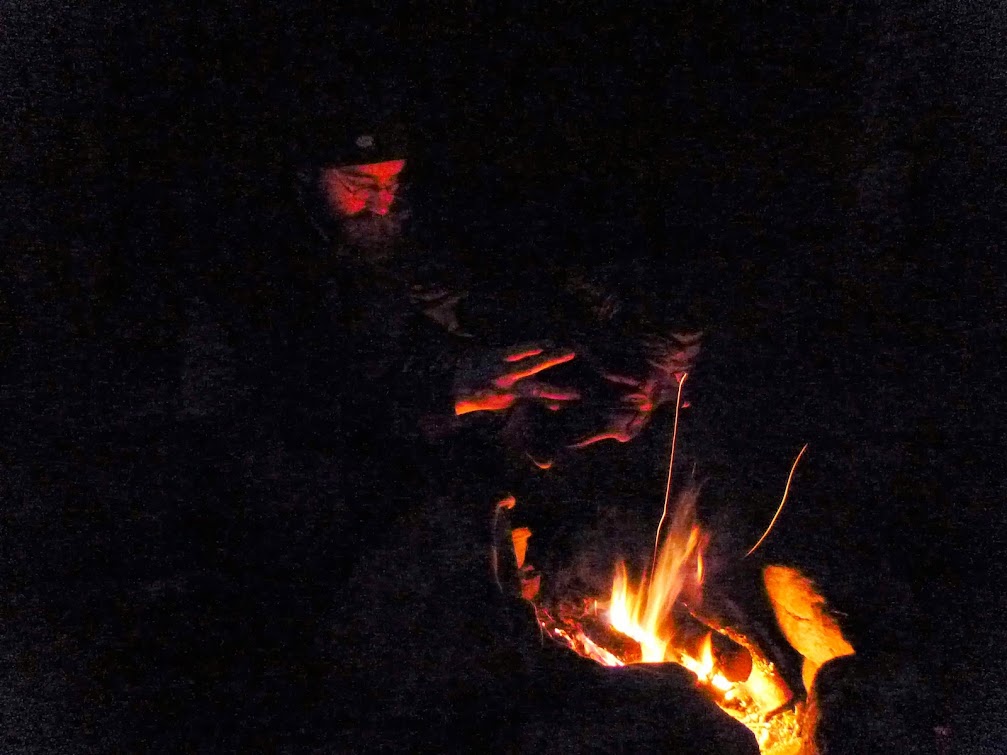 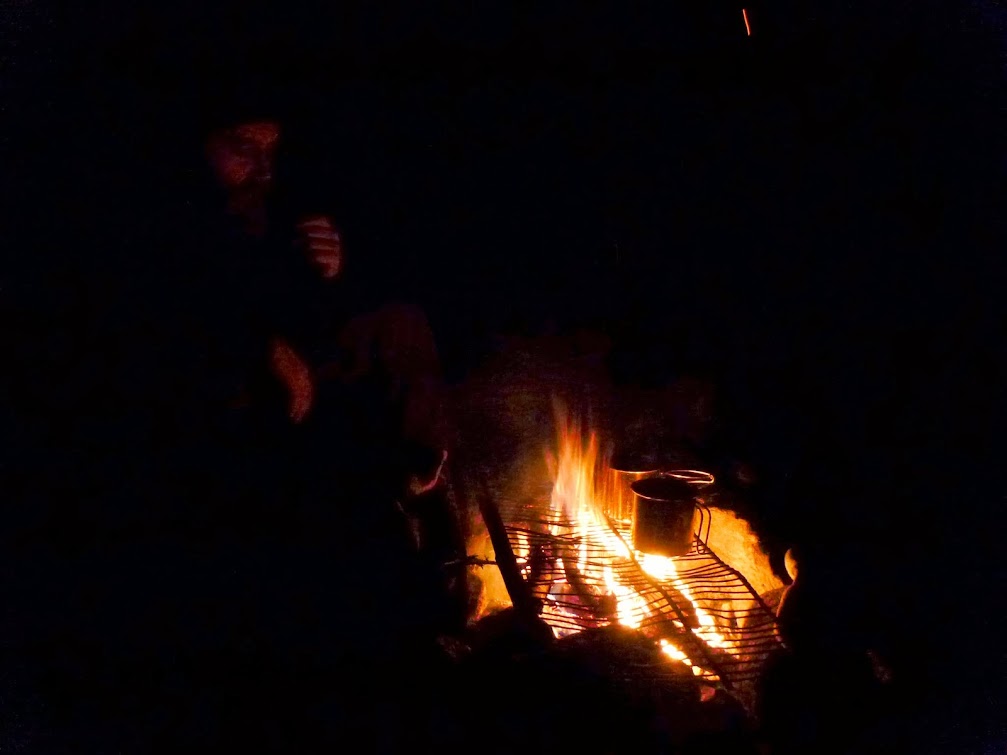 The mood was jovial as usual and we retired early around 9:30. I slept on the ground as it was very cold and no chance of rain. My poncho covered me from the dew. 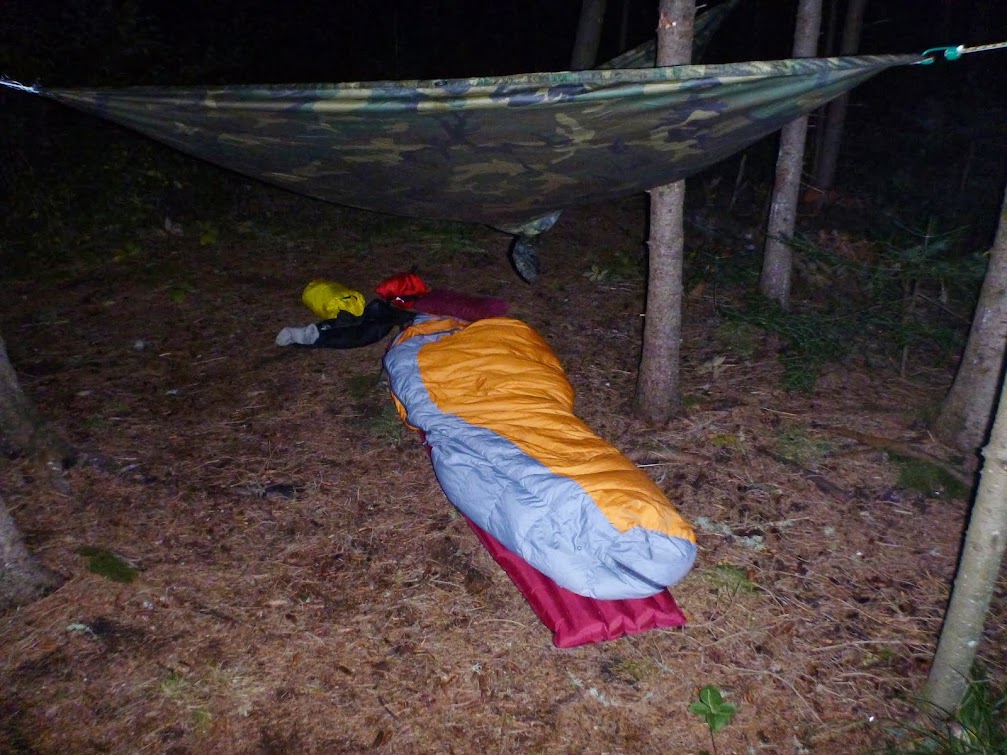 The night was very cold and at the comfort limit for Matt and my own gear. Little did we know that temperatures dipped below 30 F and a heavy frost would blanket the valley as if deposited by moonlight.